Some posts on this site contain affiliate links, meaning if you book or buy something through one of these links, I may earn a small commission (at no extra cost to you!). Read the full disclosure policy here.

As soon as I stepped off the bus, I was hit by a blast of humid wind that smelled of the ocean. Immediately I knew that Essaouira was going to be different.

I had just spent two weeks traveling around Morocco, bouncing between large cities, the Sahara Desert, and the Atlas Mountains. I’d been struck by how varied Morocco is; you can go from streets lined with palm trees to pink mountains to seas of orange sand dunes all within a couple hundred miles.

But there was one last part of Morocco that I wanted to experience before I bid the country farewell: the coast.

Most people don’t realize that Morocco has a long coastline; it stretches for more than 1100 miles along both the Atlantic and Mediterranean. It’s known for laid-back beach towns, good surfing, and better seafood.

With limited time left in Marrakech, I decided to take a day trip to the coastal town of Essaouira.

An introduction to Essaouira

Essaouira lies roughly 3 hours to the west of Marrakech. It’s an ancient coastal town dating back to at least the 5th century BC. Like much of the rest of Morocco, the settlement passed through many hands over the years (Phoenician, Roman, etc.) until the Portuguese colonized it in the 1500s.

In 1506, the Portuguese built a fortress on the coast and dubbed it Mogador. The city retained the name until the mid-1900s, but the Portuguese only held it for about 4 years. After the Portuguese were pushed out, Mogador became a haven for pirates for the next couple hundred years.

Modern-day Essaouira’s rise began in the mid-1700s, when the Moroccan King Mohammed III decided he wanted to cut off trade to Agadir in the south (which was supporting one of his political rivals). He began building up the walls, harbor, and city center – “Essaouira” basically means “the best rampart” – and the city became Morocco’s main port until the early 1900s.

Taking a day trip to Essaouira

When Mohammed III began building up Essaouira as his main port, Marrakech was the capital of Morocco. The road between the two cities, therefore, is a straight line – meaning day trips to Essaouira are quite popular.

The 13-day Morocco tour I took did not include a stop in Essaouira. And so, with only two days left in the country, I decided to use my last day to take a tour to Essaouira from Marrakech.

Day trips to Essaouira are quite popular – several tour companies in Marrakech offer them, and they are quite affordable. (I booked this tour, which cost me less than $30!)

On the way to Essaouira

My tour started with a pickup near my riad in Marrakech. Transport was in a nice Mercedes Sprinter van, and the group was fairly small – only about a dozen of us.

We headed out of Marrakech and make 3 quick stops on our way to Essaouria. The first was at a rest stop for a toilet break and a chance to grab coffee. The second and third stops were photo stops that I honestly would have preferred to skip.

The first photo stop was alongside the road where argan trees grow. In the wild, local goats will often climb these trees in order to eat the argan fruit. But since tree-climbing goats make such a great tourist photo, local shepherds now strategically place whole herds of goats in these trees and then charge people to take photos of them.

I can’t say for sure whether these goats are being abused, but this is definitely NOT a natural occurrence – so keep that in mind since your tour will almost certainly stop to visit one of these trees.

The second photo stop was at a viewpoint just outside of Essaouira, where you can see the city and coast on a clear day. We weren’t visiting on a clear day, though, and the viewpoint was manned by a couple men trying to get tourists to pay money to take photos with their camels, so I didn’t even both getting out of the van.

Things to do in Essaouira

Once you’ve been in Morocco for a while, you’ll realize that scenes like the ones above are very common here – there will always be someone trying to sell you something.

Thankfully, the vibe was very different once we arrived in Essaouira.

We arrived in Essaouira around 11:30 a.m., stepping off the mini bus near the port to be greeted by the sounds of gulls and the smell of the sea. We were given a choice about how we wanted to spend our 4 hours in the city: we could go explore on our own, or join a walking tour of the city before having some free time.

Since the walking tour was free and I wanted to learn more about Essaouira, I went with the tour version. Our local guide spent the next 1.5 hours guiding us around the highlights of Essaouira. It’s a small city, meaning we saw a lot in this short time.

The major things we got to see on our walking tour included:

Essaouira port – The Essaouira fishing port centers around the city’s historic ramparts and walls, and is filled with photogenic blue fishing boats. This is an interesting place to walk through to see the local catches of the day – as long as you don’t mind the smell of fish!

The ramparts and citadel – The ancient walls with their giant cannons still in place are a great place for a walk. You can pretend that you’re on a movie set as your stroll, since Essaouira has featured in several movies and TV shows. I was excited to learn that the city was used as Astapor in “Game of Thrones” (the city where Daenerys gets her Unsullied army).

The medina – Like most Moroccan cities, Essaouira has a medina filled with narrow streets and little shops. The medina here is surrounded by the ramparts and is a UNESCO World Heritage Site. But unlike some of the other medinas in Morocco, this one is decidedly more relaxed – and therefore more fun to wander.

Mellah – When Jewish people were forced out of Portugal and Spain, many of them fled to Morocco, where they were welcomed. Almost every city in the country has a mellah, or Jewish quarter. At one time, nearly half of Essaouira’s population was Jewish. Wandering through the mellah here is interesting – look out for the Stars of David engraved above doorways, and even some of the city gates.

After the walking tour was over, I enjoyed a seafood lunch at a restaurant with a rooftop terrace (it was pricey, but that’s the price you pay at a touristy spot), and then walked back through the city to the fishing port and beach.

Could I have used a few more hours to fully enjoy Essaouira? Probably. But I also felt I was able to soak in its laid-back vibe and sea breezes in the short time I had.

It’s a Moroccan city I would definitely visit again!

Is taking a day trip to Essaouira worth it?

After our free time in Essaouira was over, we boarded the mini bus again and headed back towards Marrakech. We made one stop on the way back at an argan oil collective where you could see how the oil was made, but then headed straight for the city.

Rush hour traffic meant it took longer to get back to Marrakech, so I used the time to take some notes on the whole day tour experience.

Before booking this tour, I was worried that a day trip to Essaouira would feel too rushed. After all, you spend more than 6 hours in a bus to get there and back, and only have about 4 hours to spend in the city itself.

But Essaouira is a very small town. The main highlights can be seen in just a couple of hours, with time left over to eat some seafood and take a walk along the beach.

Essaouira would be a nice place to spend a night or two if your Morocco itinerary allows time for it, but it’s also a place you can visit in half a day without feeling disappointed.

And, even though I didn’t love all the photo stops we made on the way to Essaouira, I did enjoy this tour overall and thought it was excellent value.

If you’re interested in booking the tour I did, it’s this one: Day Trip to Essaouira from Marrakech. It costs just under $30, and includes round-trip transport from Marrakech and a guided walking tour in Essaouira.

Would you take a day trip to Essaouira?

Pin it for later: 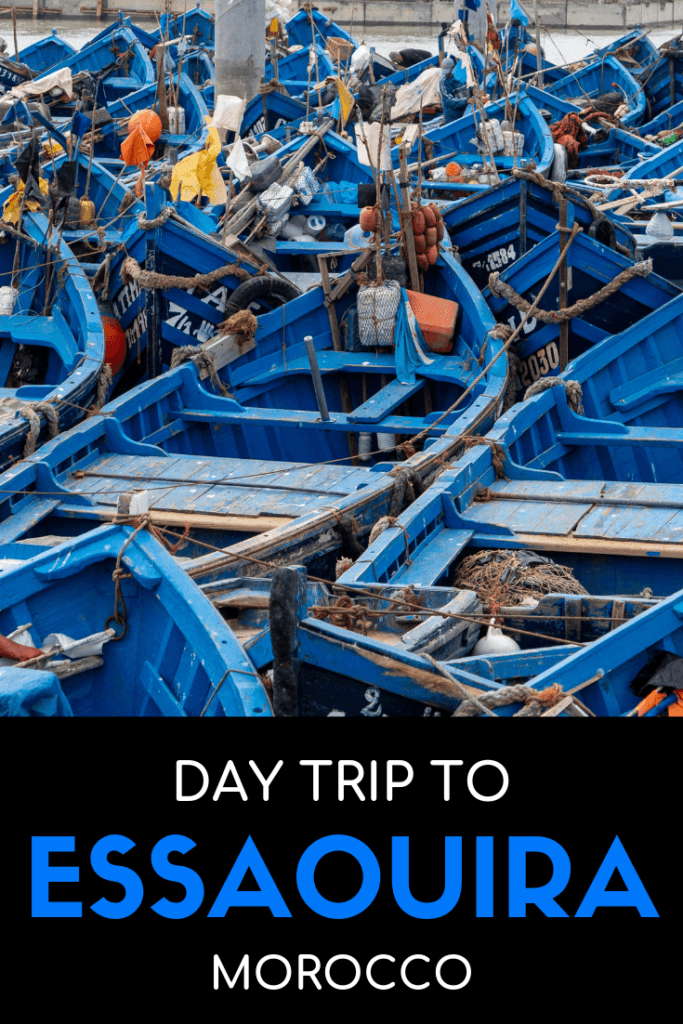