It wasn’t until I sat down to eat Luke’s stir fry with cous cous that I realized just how badly Craig and I suck at campfire cooking. We usually just throw a couple of veggie sausages on the barbie and if we are lucky an odd potato or two wrapped in foil and tucked into the coals.

Watching Luke throw together delicious meals so effortlessly on our recent bush camping adventure in to the River Red Gum Forest in Narrandera inspired me to do better from now on.

Cooking over an open fire really isn’t that difficult. With a little thought and planning you can turn a good bush camping experience into a memorable one based on dishes alone.

Luke Starr was the perfect host for our camping weekend away. He graciously offered to share his tips for cooking over an open fire, with a couple of the campfire recipes he threw together.

Tips for cooking over an open fire: 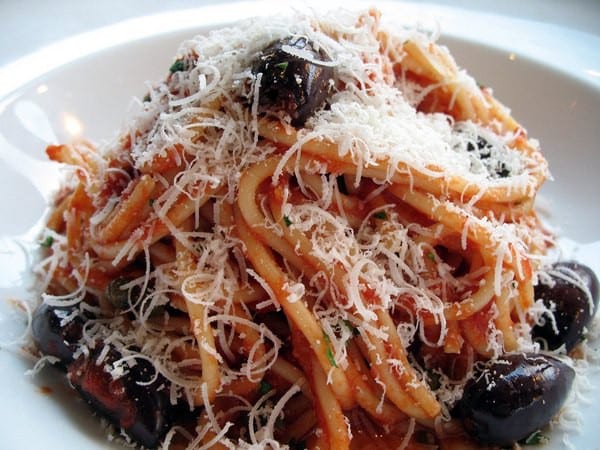 This is a rich tomato sauce flavoured with garlic and hot chillies, which we bulked out with eggplant. You’ll need a large wok-style pan and a second pot for cooking the spaghetti.

1. Drag out your coals close to the fire itself, and make a level spot for your pan. Heat the pan for a few minutes before dropping in a couple of good lugs of the olive oil.

2. When the oil starts to sizzle, throw in the onions and let them sauté for five minutes or so.

3. Once the onions have started to glisten, add the garlic and chilli. Let that sauté for another five to 10 minutes.

4. Empty the tinned tomatoes and passata into the pan, along with about a cup of red wine.

5. Once that starts to bubble, add the eggplant, basil and olives. Add salt and pepper.

6. Let the results simmer for at least half an hour. Remember, the flavour comes from the cooking time…the longer this sits on the campfire, the richer your sauce will become. You want it to reduce slightly, and for the eggplant to go really soft and take on the flavour of the sauce.

7. About 20 minutes out from serving, get a pot of water into the coals to heat for the spaghetti. Once it’s simmering, add enough spaghetti to feed your crew – noting recommended cooking times on the packet.

Serve this up with a few extra sprigs of fresh basil and shavings of parmesan cheese.

This is a super-easy one-pan dish absolutely incredible on a cold night by the fire. Not only does it work really well cooked on a campfire, the woodsmoke will add to the flavour.

While this version is for carnivores, you could replace the meat with firm tofu cubes; just make sure you pan-fry the tofu in hot oil with the onion, garlic, chilli, extra paprika, saffron and salt and pepper until golden, before adding other ingredients.

Again, you’ll need a good-sized wok for this. Remember, the rice expands as it absorbs the liquid! This recipe will comfortably feed six hungry people.

1. Drag out your coals close to the fire itself, and make a level spot for your pan. Heat the pan for a few minutes before dropping in a couple of good lugs of the olive oil.

2. When the oil starts to sizzle, throw in the onions and let them sauté for five minutes or so.

3. Once the onions have started to glisten, add the garlic and chilli. Let that sauté for another five to 10 minutes.

4. Add the capsicum, letting it sauté for a couple of minutes.

5. Add the chopped chorizo and chicken thighs; fry until the chicken is browned.

6. Add the spices and salt and pepper, to taste. I use a lot of paprika – a good three tablespoons worth – because I like the smokiness.

7. If you’ve got prawns, throw them in after the spices have had a couple of minutes in the pan. These are a bit of a luxury item when you’re camping…the recipe will work just as well without them, but they’re great to have if you can find a way.

8. Add the Arborio rice and the stock. On a campfire, it’ll take at least half an hour over coals for the rice to absorb the liquid…keep stirring every couple of minutes or so to stop the rice sticking to the hot wok.

9. You want the rice to lose any hardness, and the paella to take on a shiny, sticky consistency. Use the extra water if it turns out the stock isn’t enough to reach this point.

This is great served with a bit of chopped parsley sprinkled over the top – but really, all you need is a bowl, spoon and an appetite.

This campfire recipe was created by Elspeth Callendarwho was on the bush camping trip with us. It is a simple and delicious campfire desert.

Take a banana, cut in half lengthwise and leave in the skin. Put small pieces of chocolate in between the two halves of banana. Wrap it up in foil and put it on the hot coals. They are cooked once the banana is soft and the chocolate has melted.

A traditional American campfire desert and my favourite. In Australia they are harder to make as we don’t have Graham crackers and I don’t know of a substitute. I think some sort of thin wheat cracker.

All you do is roast a marshmallow over the fire, then when it is ready, place it between two graham crackers with a slice of chocolate in the middle. The roasted marshmallow will melt the chocolate and ooze together in the middle of the cracker. It is heaven.

No campfire is complete without alcohol to cook and eat with and to complement those campfire stories. Charlie brewed up some hot whiskey for us, a recipe straight from her English home.

Brew up some hot water. Pour some whiskey in a cup. Take a slice of lemon and poke cloves all around it. Throw it in the cup with some honey and then pour on the hot water. Stories have never sounded so good!

What are some of your tips for cooking over an open fire and favourite campfire cooking recipes?