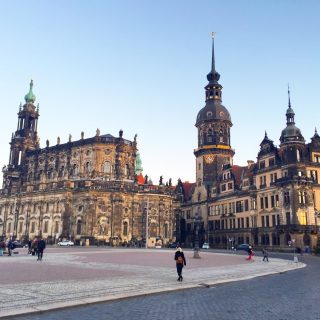 Dresden (map) is a historic city in eastern Germany, situated approximately 200km south of Berlin. Renowned for its historic Baroque architecture, the city is the capital of the state of Saxony and boasts a rich cultural heritage. Heavily bombed during World War II, the historic centre was rebuilt and many of its grand monuments, such as the Frauenkirche, the Semper Opera House, the Versailles-inspired Zwinger Palace and the adjacent Royal Palace, were painstakingly restored. The city is divided into two distinct parts on either side of the Elbe River – the historic centre (Altstadt or Old Town) hugs the southern shore of the river whilst the avant garde districts such as Neustadt are situated on the northern shore, and the Elbe River Valley lie to the east of the Altstadt. Here are my recommended things to do in Dresden:

Ten things to do in Dresden

The historic Altstadt is the main attraction in Dresden, with its beautifully restored Baroque buildings, bustling squares and charming cobblestone streets. Many of Dresden’s most famous museums and cultural institutions can be found here, all within easy walking distance of each other. I suggest a leisurely stroll that includes the Royal Palace, Neumarkt (one of the city’s main squares) and the iconic Frauenkirche (Church of Our Lady), the Zwinger Palace, the Stallhof and the Procession of Princes (a 101-meter porcelain mural; one of the few historic treasures that miraculously escaped practically untouched during WWII), the Cathedral, Semper Opera House and Brühl’s Terrace (built in the 18th century as Count Brühl’s private gardens overlooking the Elbe River). 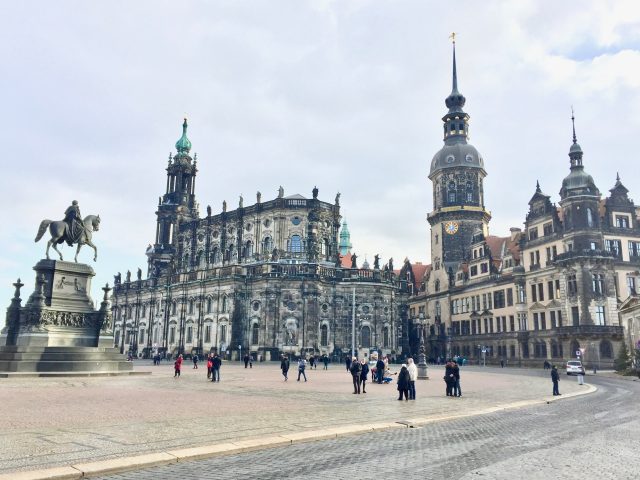 The Dresden Cathedral in the Alstadt. 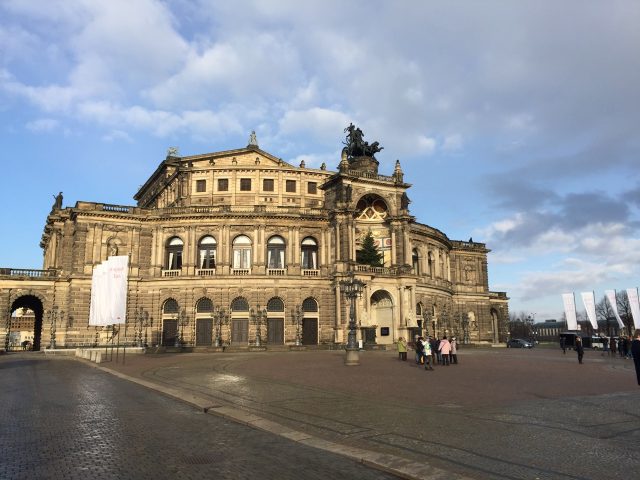 The Procession of Princes mural. Brühl’s terrace overlooks the Elbe River. The Cathedral tower and Semper Opera House can be seen in the background. 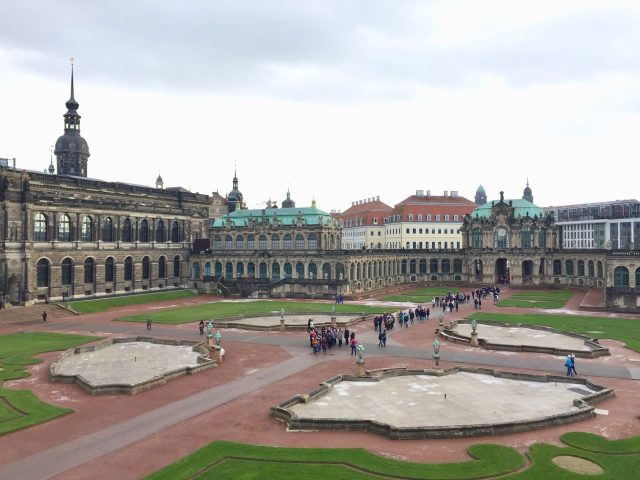 The grounds of the Zwinger Palace.

You can also opt for a private guided tour of the Altstadt. Or a tour which includes a visit to the Semper Opera House.

Most visitors to Dresden end up just seeing the Alstadt and its historical treasures but I highly recommend venturing across the Elbe River to Neustadt (the New Town). Directly across the river, you’ll find the Golden Horseman (an 18th century monument), a string of pompous-looking government buildings and museums such as the Japanese Palace but venture further and you’ll discover a vibrant district with cafés, restaurants, bars, art galleries and quirky shops. The Golden Horseman is one of the first attractions you’ll spot when you cross the Augustus bridge to Neustadt.

You’ll also find fantastic street art around almost every corner! One area to head to is the Kunsthofpassage and the neighbourhoods on either side of the Louisenstrasse.  You can also opt to join a street art tour, probably one of the coolest things to do in Dresden. There’s cool street art to be discovered in Neustadt.

While you’re on this side of the river, drop by probably one of the most beautiful dairy shops I’ve ever seen: the Dresdner Molkerei Gebrüder Pfund (Bautznerstrasse 79). 3. Enjoy a meal and a pint at a vault restaurant

Dresden has a variety of vault restaurants that serve local fare. It’s amazing to descend into a basement only to find cavernous, vaulted spaces packed with people having a meal or a few pints of the local brew. Two vault restaurants I can recommend are Sophienkeller (opposite the Zwinger Palace), Pulverturm (opposite the Frauenkirche) and Altmarktkeller – Dresdner Bierhaus (at the Altmarkt). Raphael’s little angels are famous the world over and you can find them in Dresden! The great Italian master created the painting, the Sistine Madonna, in the 16th century. In 1754, Augustus III of Poland purchased the painting and transferred it to his palace in Dresden. The painting now hangs in the stunning Gemäldegalerie Alte Meister (or Old Masters Gallery) adjacent to the Zwinger Palace. Find these world famous angels at the bottom of the painting.

The gallery is a joy for art history fans, featuring a magnificent collection of Italian/Dutch/Flemish Renaissance paintings, busts and statues. You’ll also find arguably the world’s first ‘selfie pose’ there too! 😉 The gallery of statues and busts at the Old Masters Gallery. 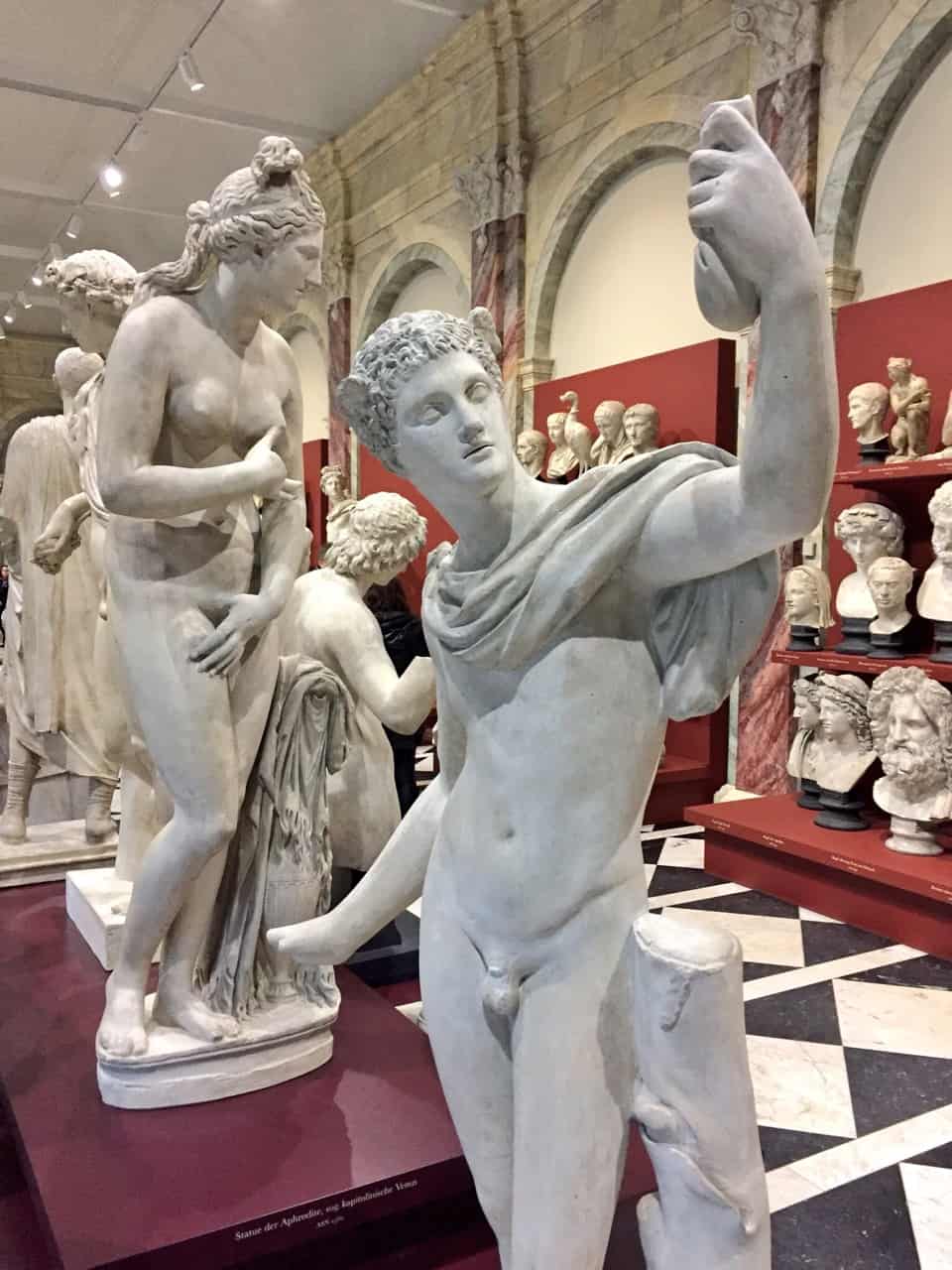 5. Admire the treasures of the Royal Palace

The Residenzschloss or Royal Palace of Dresden is one of the city’s oldest buildings – it can trace its origins back to the 13th century. Through the centuries, the palace was the residence of the electors and the kings of Saxony. These days, the palace houses five museums: the historic Green Vault and the New Green Vault, the Numismatic Cabinet, the Collection of Prints, Drawings and Photographs, and the Dresden Armory with the Turkish Chamber. The historic Green Vault, with its rich collection of treasures, and the Dresden Armory are truly a sight to behold! The Turkish Chamber displays hundreds of artifacts from the Ottoman Empire, making it one of the most important Ottoman collections outside of Turkey. The main foyer of the Residenzschloss or Royal Palace. One of the many treasures in the Residenzschloss. Not many know this but Dresden is home to two castles that formed the decor or the inspiration for the castles in various Cinderella movies. The palace scenes in the 2015 movie Cinderella, with Cate Blanchett and Lily James, were computer-modelled based on the Zwinger Palace in Dresden’s Altstadt. Details of the Zwinger Palace were used in the Cinderella movie. 7. Stroll around the Great Garden

The Großer Garten (or Great Garden) is a massive Baroque-style park just outside the Altstadt. Opened in the 17th century, the park features symmetrical pathways and a little palace (the Sommerpalais). The park is a great place for a stroll past towering trees and expansive lawns. While you’re there, check out the transparent Volkswagen Factory at the edges of the park!

8. Attend a performance at the Semper Opera House The main staircase of the Semper Opera House. The stunning ceiling of the Semper Opera House.

9. Go palace-hopping along the Elbe

The Elbe River to the east of Dresden is an area of vineyards and palaces, making it a great option for a half-day trip from the city centre. There are three 19th century palaces (Eckberg, Lingner and Albrechtsberg) located practically next to each other which you can visit on foot, passing woodlands and parks between them, and enjoy the beautiful views of the vineyards and the Elbe Valley below. View of the Elbe River, vineyards and Dresden in the background.

To get there, take tram 11 to Elbschloesser. You can easily combine a visit to the Elbe castles with an exploration of Neustadt (point 2 above) using tram 11 from/to Albertplatz.

The Yenidze factory is one of the more extraordinary buildings in Dresden. Located not far from the Zwinger Palace, the Yenidze was built in the early-20th century as a tobacco factory in the style of a mosque. With its beautiful glass dome and minarets, it definitely looks like a mosque! These days, the building houses offices and there’s a rooftop café and restaurant in the dome. Where to stay in Dresden

I stayed at the Grand Hotel Taschenbergpalais Kempinski, which is centrally located in the Altstadt, across the road from the Residenzschloss (Royal Palace) and the Zwinger palace, and the Dresden Cathedral and Semper Opera House are literally a stone’s throw away. The rooms are spacious and tastefully decorated. There are several restaurants and bars – my favourites are the Palais Bistro (great French food in a relaxing ambiance) and the Karl May Bar (excellent cocktails in this cozy pub!). Check out rates for this hotel. 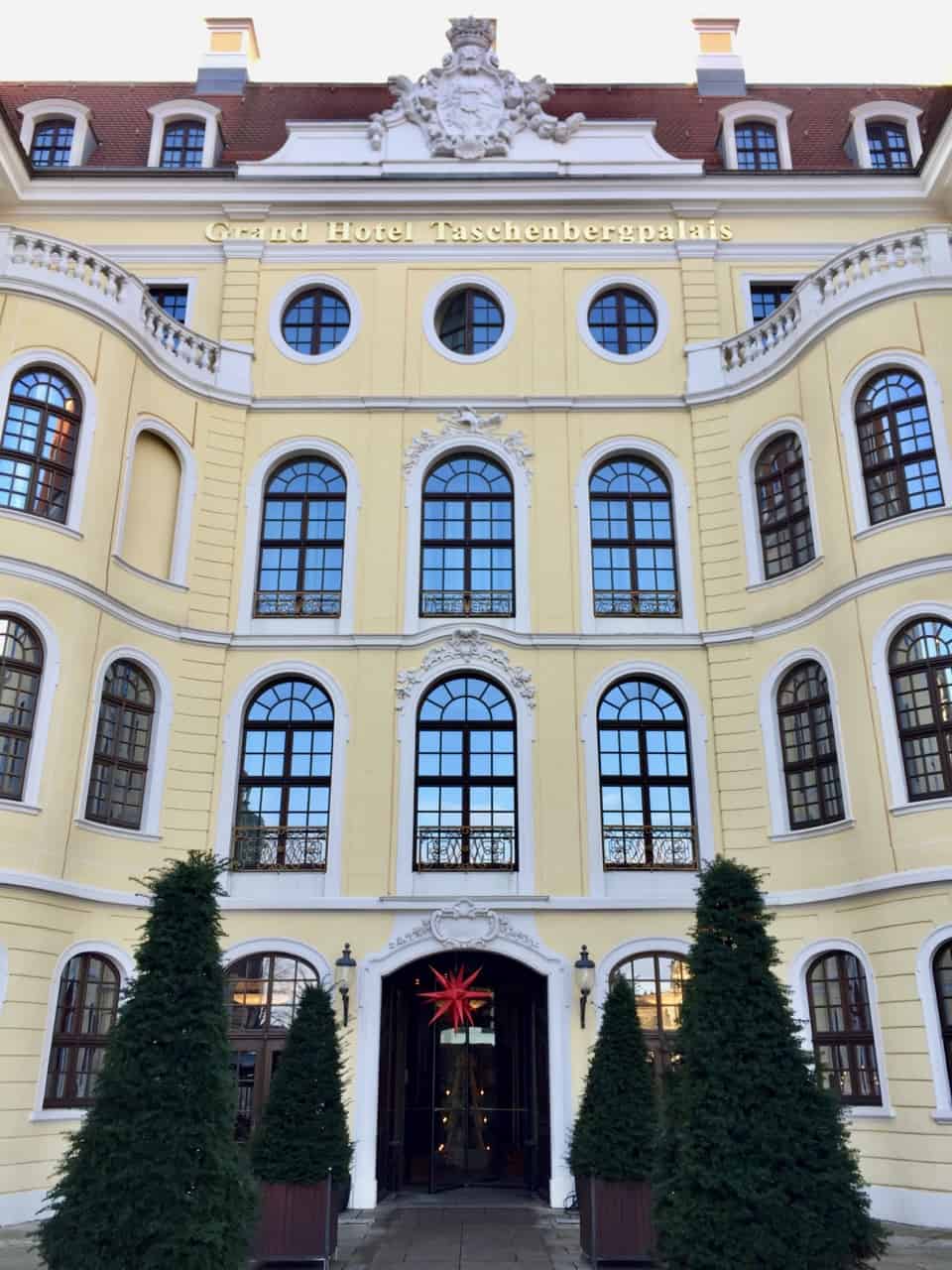 My room at the Hotel Taschenbergpalais Kempinski.

How to get to Dresden

Dresden has an airport with frequent connections to major cities in Germany and elsewhere in Europe. I flew with KLM direct from Amsterdam. Dresden is also connected by (high-speed) rail and bus services with many cities in Germany. In addition, Prague (Czech Republic) is less than a two-hour drive away.

Note: a big thank you to Dresden Tourism and Hotel Taschenbergpalais Kempinski for your terrific hospitality! All views expressed above are mine.