Surrounded by snow-capped mountains, this
metropolitan city is the largest in the country and an excellent place to enjoy
an unexpected adventure.  Once the
capital of Kazakhstan, Almaty still remains a hub of culture and commerce in
the region.  Check out these four reasons
to visit Almaty—and once you do you will begin to fall in love!


A Great Intro to Central Asia

Almaty is one of the largest cities in
Central Asia, and it has the largest airport as well.  This city is a great introduction to Central
Asia and boasts itself as a multicultural hub—with Kyrgyzstan to the south,
China closely to the east and Russia on the northern side, Almaty can give you
a taste of all these regions.
Once you are in Almaty, you can easily make
your way around on the tram or the metro—there is even an app for the transit
system with great route info. Almaty also has a decent-sized expat population.

Check out the Excellent Bazaar

Almaty can show you what life is like along
the Silk Road!  The buzzing Green Bazaar
is the place to immerse yourself in the multicultural nature of this city.  From spices and fresh produce to the oft-shocking
(for Westerners, anyhow) butcher’s hall and freshly prepared and ready-to-eat
foods.  Make sure to try some kurt and a fresh glass of kvas while you stroll around the bazaar.

Relax in an Opulent Russian Bathhouse

Perhaps one of the favourite attractions in
Almaty, the Arasan Baths offer up a relaxing experience and the chance to see
some 1980s socialist architecture.
Beginners should visit for only an hour—the bathhouse has the options of
trying A Russian banya, a Finnish sauna, a Turkish steam, and a Moroccan hammam
slightly hidden–but worth it–down a second set of stairs.  The giant domed ceilings are designed in a
way so that condensation does not drip on bathers, and the intricate mosaics
and tilework on the interior show a stark contrast to the almost bleak
exterior.

Walk the Streets for Unique Architecture 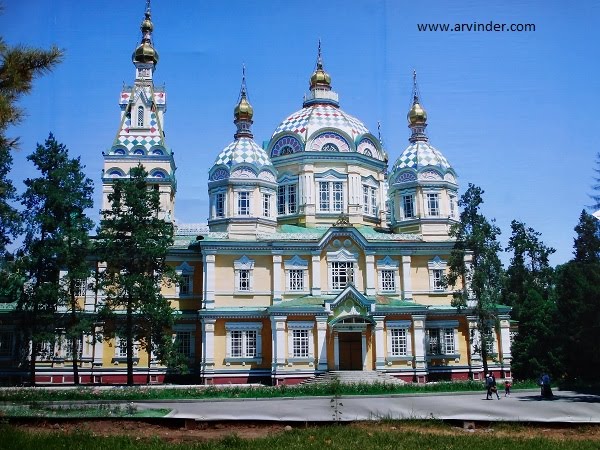 Rocked by earthquakes now and again, Almaty
does not have a large abundance of pristine historical buildings.  But, the Church of the Holy Ascension in
Panfilov Park is a can’t-miss site.  The
bright, yellow church is the second tallest wooden building in the world.  The colorful exterior is matched only by the
exquisite interior and magnificent altarpiece.
The city also holds some interesting
Soviet-era memorials, and the buildings offer a look at Socialist
buildings—lots of concrete and harsh shapes, but, when you look closer there
are still intricate details that are not commonly found.  There are specific walking tours for those
interested in the historical aspects of the architecture of Almaty.