Lisbon is the capital and the biggest city of Portugal. Lying on the banks of the Tagus estuary and bordering the Atlantic Ocean, Lisbon boasts an extremely wealthy history, and a plethora of atmospheric neighbourhoods, grand monuments, picturesque lanes and broad boulevards. My current take a look at reminded me however once again why it is one particular of my favourite European capitals! Each landing in and taking-off from Lisbon was a treat as I had panoramic views of Lisbon from the plane window! I sat in row ‘A’ on each flights. The plane landed from a southwesterly path and on my way dwelling, took off in a southwesterly path.

The plane approached Lisbon from the north, flew previous the city and more than the Atlantic Ocean ahead of turning about to make the final method. As the plane approached Lisbon from the Atlantic Ocean, it flew more than the beaches of Costa da Caparica. The small tower on the banks of the Tagus (centre of the photo) is the historic 16th century Torre de Belem, a UNESCO Globe Heritage web site. The ‘tower’ in the far suitable of the photo is yet another popular Lisbon landmark: the Padrão dos Descobrimentos. Just ahead of landing, yet another popular Lisbon landmark came into the view: the 18th century Aguas Livres Aqueduct.

The airport is situated around six kilometers from the city center so the panoramic views of Lisbon unfolded swiftly suitable following take off! 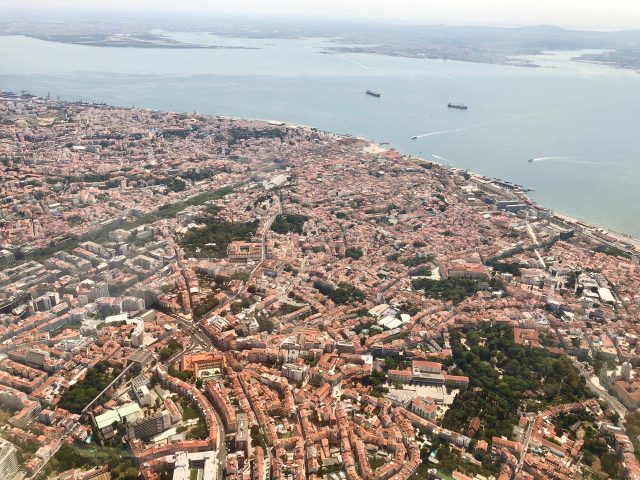 The significant cluster of buildings in the centre is the Bairro Alto district, with its maze of picturesque streets. The plane flew more than the Atlantic Ocean ahead of turning back towards Lisbon in a northeasterly path. The 25th April Bridge (related to the Golden Gate Bridge in San Francisco) can clearly be observed. Just ahead of the plane climbed above the clouds, I caught a view of Lisbon Airport (center-left) and the 17km extended Vasco da Gama Bridge that crosses the Tagus.

If you are flying into or out of Lisbon, pick a window seat for some fairly spectacular views of the city!

Study other Velvet Escape posts from the Plane Views series: