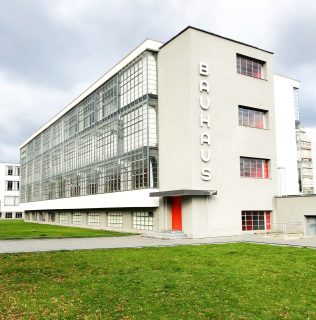 The Bauhaus Academy in Dessau.

When I was a kid, I was always in awe of an uncle of mine. An architect by profession, his minimalist, functional designs never ceased to intrigue me. His work, be it a house or office building, always stood out. Clean lines, grey and white surfaces with varying textures, shady spaces and large windows with views of the greenery outside were his signature. It was only when I took an interest in architecture during my adolescence that I learned about the Bauhaus movement which was founded in Weimar, Germany in 1919 by Walter Gropius, and suspected that my uncle was heavily inspired by it. This German Modernist movement encompassed not only the fields of architecture but also art, design and even the performing arts. When I received an invitation from the German National Tourist Board to learn more about Bauhaus and highlight the 100th birthday of the Bauhaus movement, I was quick to accept. Being a fan of Modernist architecture, this was the perfect opportunity to visit the most important Bauhaus sites in Germany and learn about its impact on architecture and design around the world.

A (very) brief history of Bauhaus

The Bauhaus movement was founded by Walter Gropius in Weimar in 1919. Heavily influenced by Modernism (a cultural movement which can trace its roots back to the 1880’s), an upsurge of radical experimentation in the arts after the horrors of WWI and a new aim to achieve harmony between function and design, Bauhaus became one of the most influential architectural and design movements of the 20th century.

In 1925, the Weimar school was forced to close. Walter Gropius and his colleagues moved the school to Dessau where they continued their work. Graduates of the school brought the Bauhaus movement to other parts of the world. One of them, Arieh Sharon, returned to Israel in the 1930’s and not only designed the ‘White City of Tel Aviv’, a collection of over 4,000 Bauhaus buildings, but also the state of Israel! He’s known as probably the only architect in history to have designed an entire country!

During WWII, the most prominent figures of the Bauhaus movement fled Germany as the Nazis forced the closure of the schools. These figures included Walter Gropius, Marcel Breuer, Moholy-Nagy and Mies van der Rohe who resettled in America. Gropius and Breuer taught at the Harvard Graduate School of Design, and through their teachings, Bauhaus (inspired) architecture became prominent in cities like Chicago (the twin towers of the Marina City and the IBM Building are examples). The Marina City twin towers were designed by Bertrand Goldberg, a student of the Bauhaus School. Image by Diego Delso | Wikimedia Commons

Bauhaus had a significant influence on design education. Its main objective of harmonising art, craft and technology was always a main feature of the curriculum at Bauhaus schools. Perhaps as a consequence, Bauhaus played a pivotal role in modern furniture design. Designs such as the cantilever chair and the Vassily chair were revolutionary in its day and still remain relevant till this day.

My tour of Bauhaus sites in Germany started in Weimar, a historic town in the state of Thuringia in central Germany (map). I’d been to Weimar before but only knew it as the former residence of Goethe and Schiller, two prolific 18th/19th century German writers. The Neptune fountain and City Hall in Weimar. The statues of Goethe and Schiller outside the National Theater of Weimar. They are two of Weimar’s most famous residents and these days, visitors can see their former homes and museums dedicated to their work. The theater played an important role in German history. The first German constitution, also known as the Weimar Constitution – revolutionary in its day for championing women’s rights, universal suffrage, education and promoting democratic values – was created here in 1919. The semi-circular window was also where the German flag was hoisted for the very first time.

A UNESCO Heritage town, Weimar was also the birthplace of the Bauhaus movement when Walter Gropius set up a school there in 1919. The Bauhaus school combined architecture, crafts and arts, and attracted prominent architects, painters, sculptors and artists such as Oskar Schlemmer, Vassily Kandinsky and Paul Klee. The Bauhaus University, designed by Henry van de Velde, is a must-see for anyone visiting Weimar (and who is interested in Modernist architecture). I didn’t get to take pictures due to strict copyright rules but some of the other media did. That staircase inside the university building is just stunning isn’t it?

The extension of the Bauhaus University, located in the centre of Weimar, is also a prime Bauhaus example, with its massive windows and sleek lines. The extension of the Bauhaus University Weimar. The massive wooden chair outside the Bauhaus University Weimar.

Another important Bauhaus site in Weimar is the Haus Hohe Pappeln, the former residence of Henry van de Velde, the Belgian designer and architect who played a prominent role in the earliest days of the Bauhaus movement. Van de Velde designed and built the house in 1907/08, and lived there with his family until 1917. The tour of the house was one of the highlights of my trip: the functional design, symmetry and Bauhaus fixtures were amazing! It’s really hard to believe that this house is more than 100 years old! In 2019, a new Bauhaus Museum will open in Weimar and promises to be a beautiful showcase of the earlier Bauhaus works.

From Weimar, we made our way to Erfurt (map), with a stop at the Margaretha-Reichhardt-Haus in the city’s outskirts. A student of the Bauhaus School in Dessau (1926-1931), Margaretha Reichhardt became one of the most important designers to emerge from the Bauhaus weaving workshop. The looms in her workshop are still in use today and it’s a fascinating experience to see Bauhaus design integrated in textiles, tapestries and carpets. A lady at work on one of the looms at the Margaretha Reichhardt house. A beautiful Bauhaus tapestry at the Margaretha Reichhardt Haus. Inside the living room of the Margaretha Reichhardt house. Note the Bauhaus steel folding chair and cantilever chair.

In Erfurt, we got to see one beautiful Bauhaus building before darkness set in: the Schellhorn Haus in the city centre. It was my first time in Erfurt and it was love at first sight! If you’ve been reading this blog for some time, you’ll know how much I love medieval towns (such as these in Costa Brava or Bergamo in Italy), and Erfurt is a stunning example! I was really bummed that we were only spending a night in Erfurt. After a stroll around medieval Erfurt, I promised myself that I would return soon! The Domplatz in Erfurt with the Cathedral and the adjacent St. Severus Church. The Merchant Bridge. The houses on the bridge have been inhabited for over 500 years!

From Erfurt, we made our way to Dessau, with a stop in the charming hilltop town of Dornburg (map). The town, with its colourful houses, castles and vineyard-covered slopes, is a joy to stroll around. There are beautiful panoramic views of the Saale valley from the castles and the surrounding gardens. 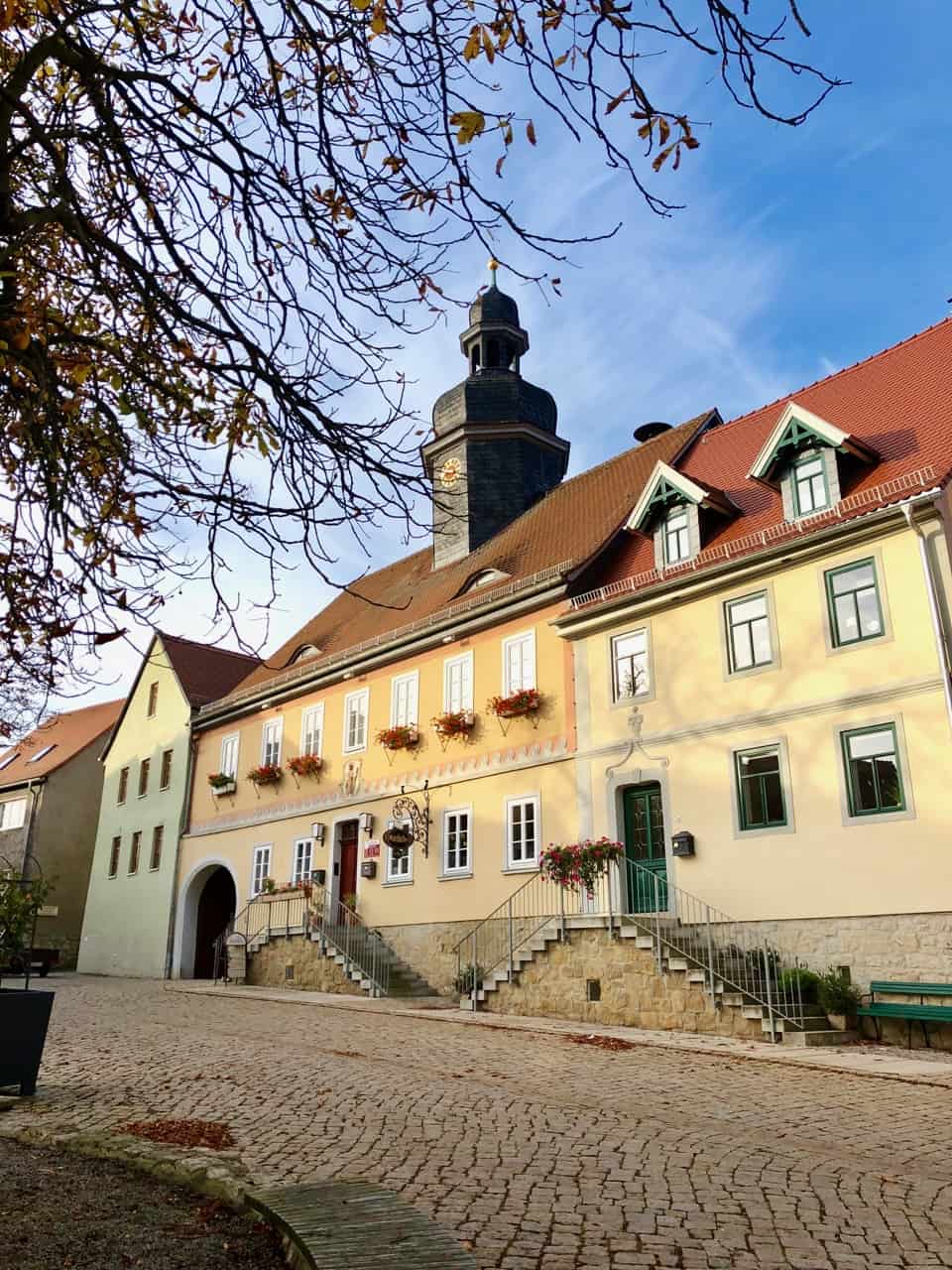 The Rathaus (Town Hall) in Dornburg. The view of the Saale valley from Dornburg. Read more about what to see in Dornburg

The purpose of our stop in Dornburg was to visit the pottery workshop, which was founded by Walter Gropius and Max Krehan in 1920. This was another fascinating insight into the impact of Bauhaus in art and design. The workshop still creates pottery pieces till this day. Equipment in the Bauhaus pottery workshop. Figurines at the workshop.

From Dornburg, we made our way to Dessau (map), the home of the second Bauhaus School after the forced closure of the Weimar school in 1925. Dessau is an intriguing city. Having suffered heavy bombing during WWII, the city was rebuilt with row upon row of Socialist-style apartment blocks and a spattering of pompous buildings. I especially loved this 3D-like apartment block in the centre of Dessau. 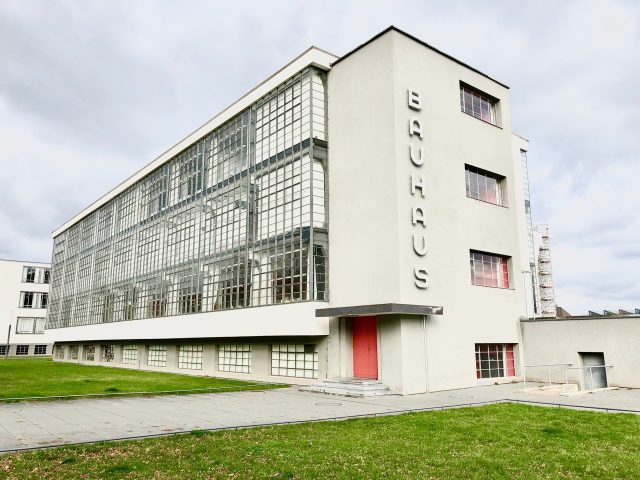 The Bauhaus School in Dessau. The entrance to the Bauhaus School Dessau.

The unity of function, design and technology was clearly evident in this building. Large glass windows served to bring the outdoors indoors and promote transparency. The white and grey surfaces formed a staid backdrop for the bright primary colours that adorned beams, railings and doors. The primary colours provided not only a splash of colour but had a function: to draw attention and guide visitors from each space into the next. One primary colour that isn’t used indoors is green. The fascinating (and clever) reason is because green represents nature or the outdoors. The idea is that the abundant use of glass would bring the outdoors (the green lawns and trees outside the building) into the indoor spaces. I was just blown away by the technological details such as the mechanical windows, steel folding chairs in the auditorium and the glass-curtain walls. It was hard to believe that this building is almost a century old! Windows of the Bauhaus School. The Bauhaus School also has a terrific Gift Shop with books, posters, clothing and other cool souvenirs. I bought myself a colourful Bauhaus-inspired scarf. Hehe!

Near the Bauhaus School are several houses of the Bauhaus Masters such as this one, the house of Muche-Schlemmer, designed by Walter Gropius. These houses shouldn’t be missed and are a short walk from the school. Our next stop was the City Employment Office, another Bauhaus design. I especially loved the semi-circular corridor with its glass ceiling. Notice the black knob next to the first door and the thin cable that goes into the ceiling in the photo below? That’s an ingenious way of opening one of the panes in the glass ceiling for ventilation. I had a go at turning the knob and opening the window – a century-old technology that still works today! Inside the Employment Office in Dessau.

On our final evening of the trip, we were treated to a dinner at another prominent Bauhaus building in Dessau: Kornhaus. Located on the banks of the Elbe River, this beautiful building has huge glass windows which offer stunning views of the river. I recommend coming here for a sunset drink and/or a meal. There are many more Bauhaus sites in Germany which I didn’t get to visit on this tour, such as the Bauhaus Archives and other Bauhaus buildings in Berlin, Chemnitz, Bernau and other towns scattered across Germany. I learned a lot about the Bauhaus movement on this tour and I absolutely loved the places we visited. And I’m definitely returning to Erfurt!

Bauhaus celebrates its centenary in 2019 with the opening of two Bauhaus museums: in Weimar and in Erfurt. Many of the Bauhaus buildings across Germany are being meticulously prepared for the 100th birthday so if you’re a fan of Modernist architecture and Bauhaus, the centenary is the perfect reason to visit Germany in 2019!

Find out more about the events taking place in conjunction with the Bauhaus Centenary in 2019.

One more tip: if you love Bauhaus furniture design, check out the Tecta Kragstuhlmuseum (Cantilever Chair Museum) in Lauenförde (map).

Note: my trip to Germany was made possible by the German National Tourist Board. As always, all opinions expressed above are mine, and mine only.