Another day at the office for these fishermen in Mauritius!

On a world map, Mauritius is a tiny speck in the vast Indian Ocean off the coast of Madagascar (map). Famous for its stunning beaches and luxurious resorts, Mauritius is a popular honeymoon destination. However, there are many more things to do in Mauritius besides lazing on a beach. With its spectacular lagoons, blinding white beaches, lofty peaks, lush forests, beautiful people and delicious cuisines, Mauritius is an amazing, multi-faceted island with lots to offer. My first visit to Mauritius was back in 2013 and I fell for its beauty and charm in an instant. I’ve been back once since then and had a terrific time exploring more of the island. Mauritius has a tropical climate with sunny, warm weather year round. The best time to visit Mauritius is between May and December when it’s slightly cooler and dry. Here are my suggestions for things to do in Mauritius:

If you’re just planning a beach escape, here are some relaxing things to do in Mauritius while you’re on a beach! Haha! 🙂 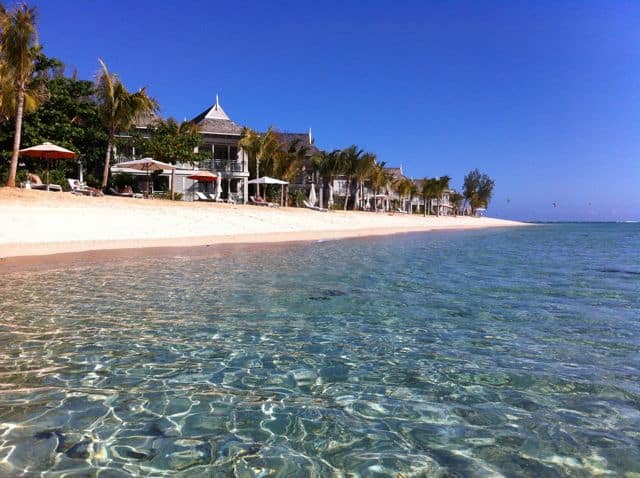 The amazing beach at the St. Regis Resort in southwestern Mauritius. Another amazing beach. This one is in Poste de Flacq in northeastern Mauritius. 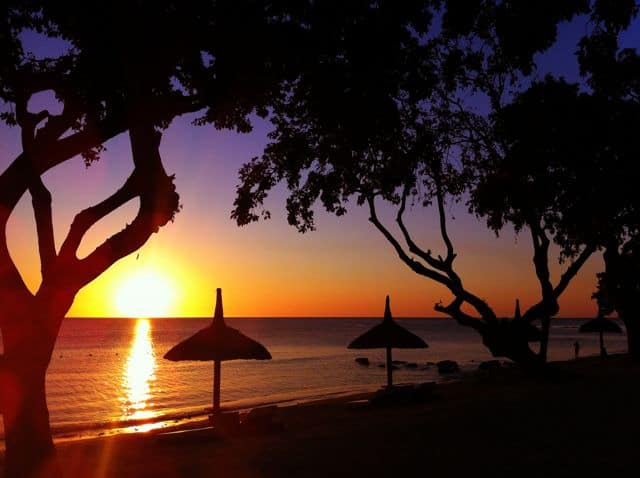 With beaches like these, who would want to do anything else? Haha! Oh wait, you can always go to the spa! Many of the luxury beach resorts have great spas – my favourites spas in Mauritius are the spas in Shanti Maurice Resort, Four Seasons Anahita and The Oberoi. You’ll return fully rested and totally zen.

Read: my list of recommended luxury hotels in Mauritius

If you’re the more active type and want to see more of the island (and I recommend you do), here are my suggested things to do in Mauritius:

1. Go on a helicopter or microlight tour of the island

This is probably one of the most spectacular things to do in Mauritius! Seeing the spectacular lagoons, with their breathtaking colours, from above is an unforgettable experience. Air Mauritius provides helicopter tours from Sir Seewoosagur Ramgoolam International Airport. Read about my helicopter tour of Mauritius. 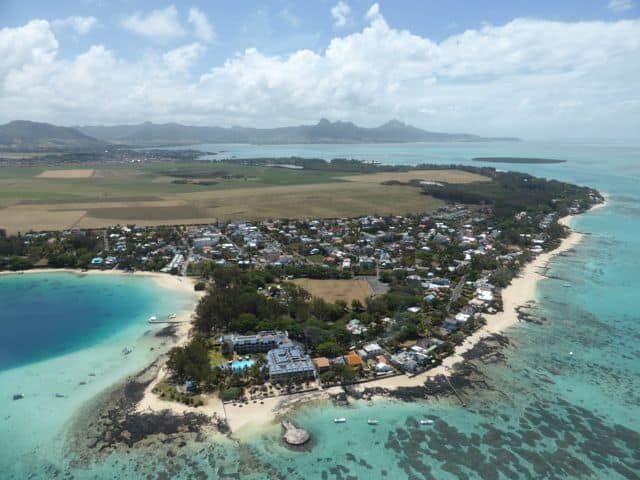 The coastal view from the helicopter tour.

Tamarind Falls are a series of seven cascades in southwest Mauritius. Surrounded by lush forests and consisting of rock pools and gushing streams, it’s a great place for a hike and to enjoy the tropical forests and views, followed by a refreshing swim. Check out this guided hiking tour of Tamarind Falls. 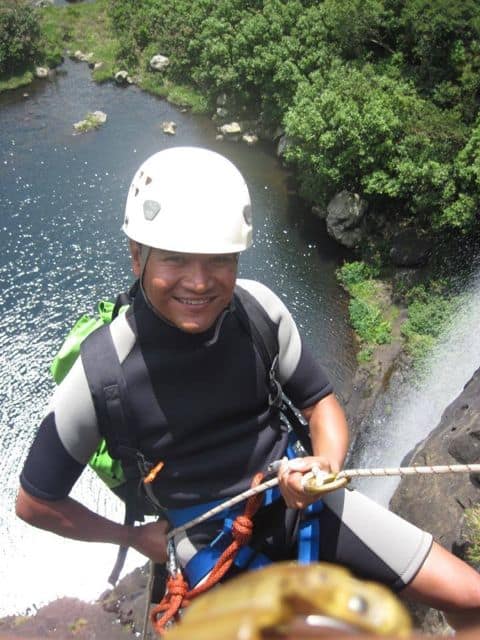 That’s me rapelling at Tamarind Falls! 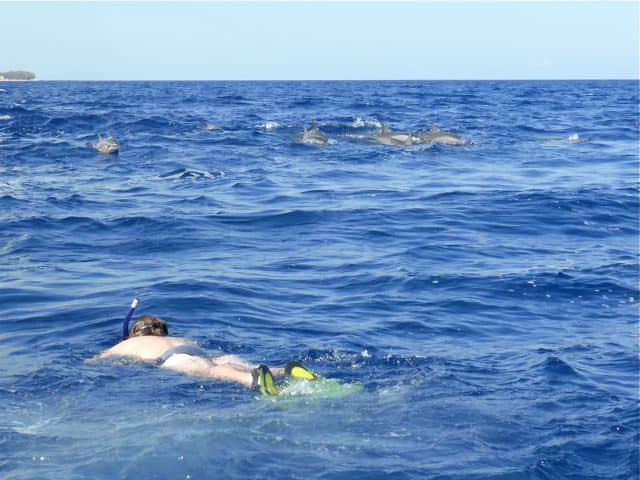 Swimming with dolphins off the coast of Black River.

4. Get active in/on the water!

There’s a host of water-based activities, from snorkelling in the lagoons to scuba-diving, kite-surfing (Mauritius is one of the best kite-surfing destinations on the planet), wakeboarding, deep-sea fishing and sailing. 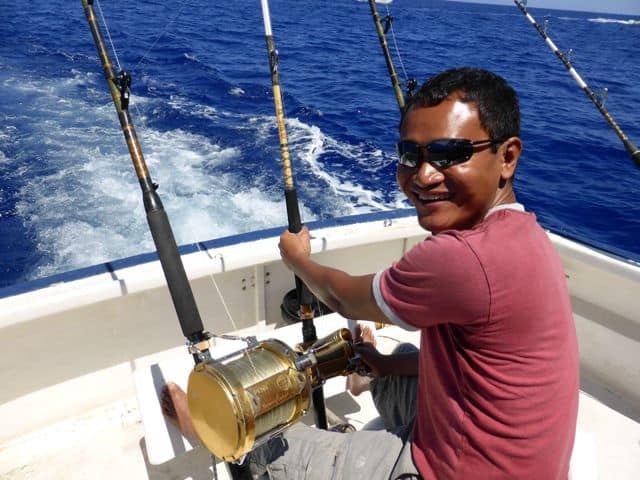 That’s me on a fishing trip. Probably the reason we didn’t catch anything that day! 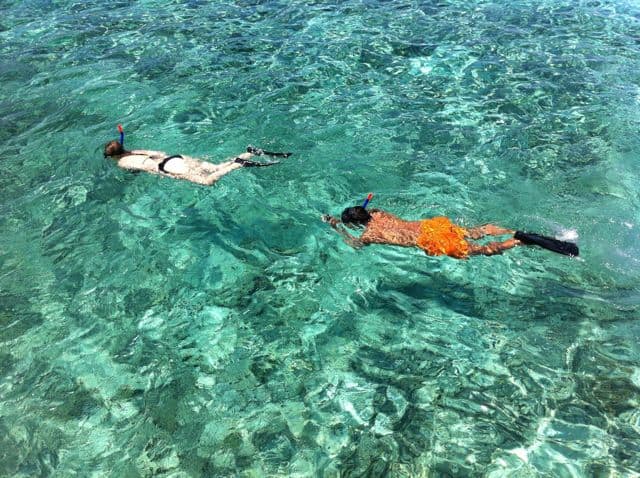 5. Experience the natural wonders of Mauritius

The dodo bird may be extinct but Mauritius is still home to some amazing natural attractions. The Seven Coloured Earths are a geological formation found in the Chamarel plain of the Rivière Noire District in southwestern Mauritius. It’s a wondrous experience to see the colours of the exposed rock face of the hills. This area is close to Black River where you can hop on a boat to go swimming with dolphins (see above). Other natural attractions include the giant tortoises (at La Vanille Nature Park) and the giant water lilies (Victoria Amazonica) at the lovely Botanical Gardens in Pamplemousses. Join this day tour that includes swimming with dolphins, a visit to a dormant volcano, the giant tortoises and the Seven Earths. Get face-to-face with a giant tortoise! 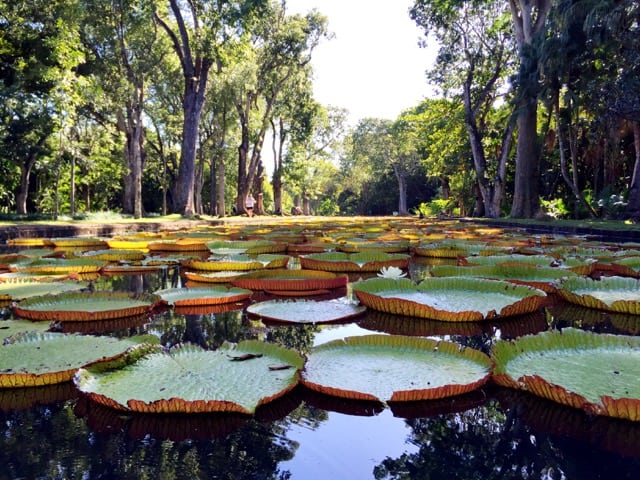 The giant water lilies in the Botanical Gardens.

6. Learn more about the history of Mauritius

Mauritius has a long and often tempestutous history. The island was named Mauritius by the Dutch, the first Western settlers, who arrived in the 16th century. They named the island Mauritius after the Dutch Governor at the time, Maurits van Nassau. Throughout the island, traces of this history are still visible such as the Old Grand Fort built by the Dutch or Fort Adelaide (or La Citadelle) built by the British in the 19th century on a hill overlooking the capital Port Louis. A great museum to visit is the Blue Penny Museum in Port Louis. You can also learn about the history of Mauritius at L’Aventure du Sucre, a living museum dedicated to the colourful history of sugarcane (and rhum) in Mauritius. 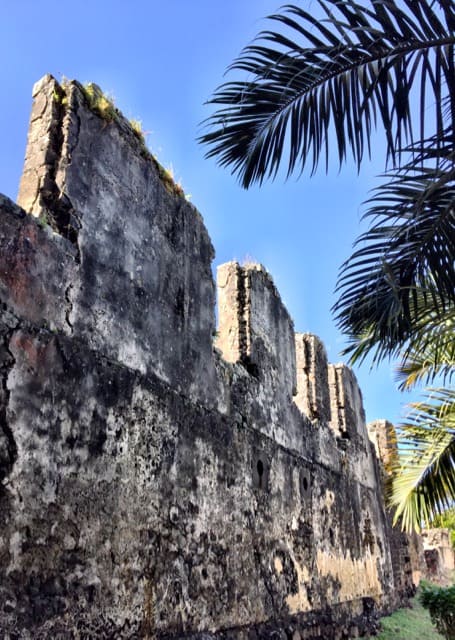 Old Grand Port, the site of the first Dutch settlement on Mauritius.

7. Hike to the peak of Le Morne Mountain

Le Morne mountain is a massive basaltic monolith with a summit 556m above sea level. Located at the southwestern tip of Mauritius, Le Morne mountain offers amazing views of the lagoons that extend from its foot to the vast expanse of the ocean. It’s a somewhat rigorous hike but the spectacular views are so worth it! Check out this guided hike to the peak of Le Morne mountain. 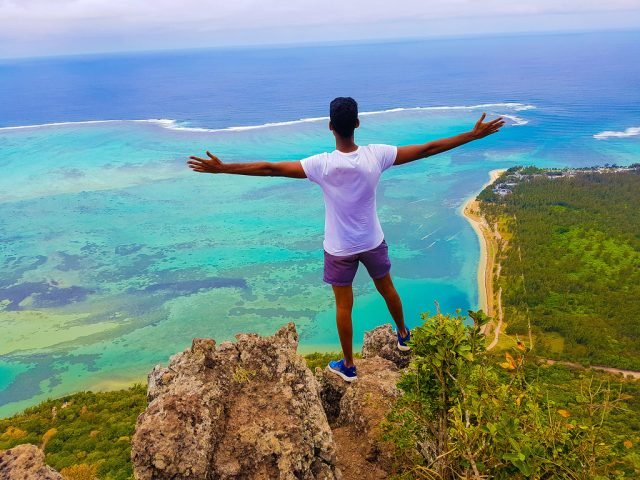 The spectacular view of the lagoons from Le Morne mountain. Image courtesy of Presram Hurree.

While you’re up there, you might be able to make out the contours of the ‘underwater waterfall’, a bizarre natural phenomenon just off the coast of Le Morne: 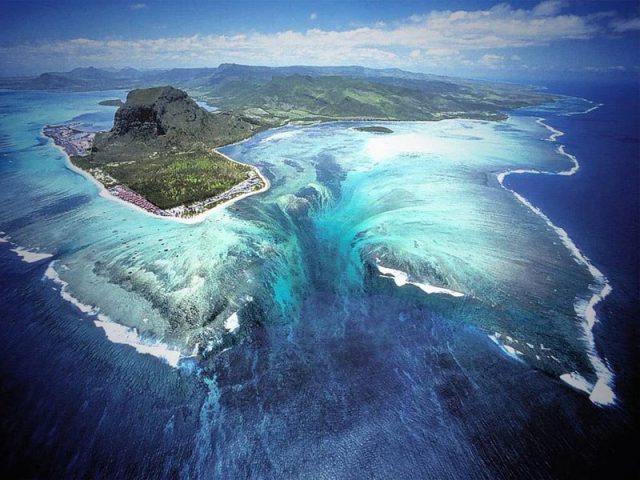 Underwater waterfall (image courtesy of Twisted Sifter). Le Morne mountain is on the left in the photo.

8. Have an authentic local glamping experience

On my last trip, I visited Otentic, a lovely tented accommodation overlooking the Grand River South East. The tents are amazing, some with beautiful views of the lagoons in the distance. Many activities are organised daily, such as boat trips to nearby islands, cooking courses, hikes and canoe excursions. While there, I had the opportunity to cook with the locals. I made a farata (an Indian pancake) which I then devoured with a dal curry! Staying here is a fabulous experience, worlds away from the luxury resorts that dot the coast. Check out Otentic. 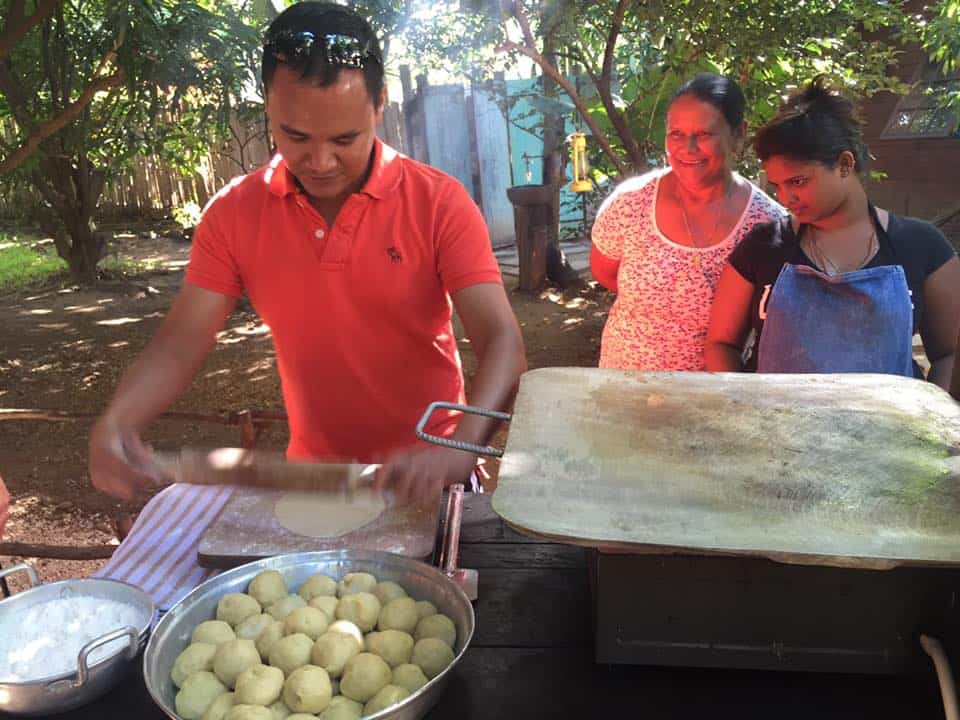 Me making farata with the locals at Otentic. Guess I was doing a good job, judging by that big smile! (image courtesy of Shivya Nath).

Port Louis is the capital of Mauritius. It’s a bustling city with various markets, historical sights and a newly-developed waterfront area. Interesting places to visit in Port Louis include the Blue Penny Museum, the Central Market, the Waterfront and Fort Adelaide (for panoramic views of the city). 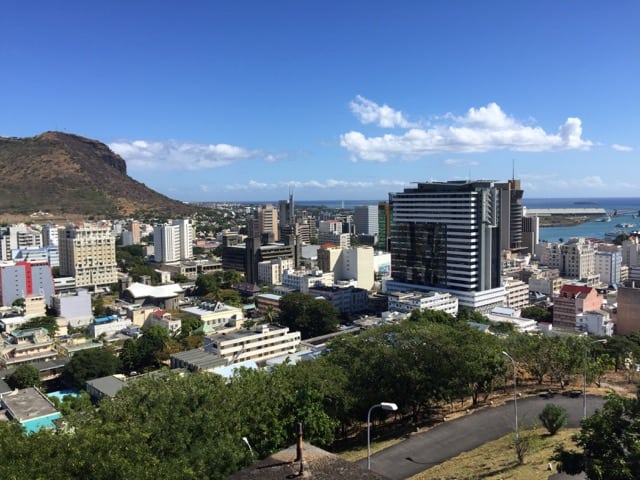 A panoramic view of Port Louis from Fort Adelaide. 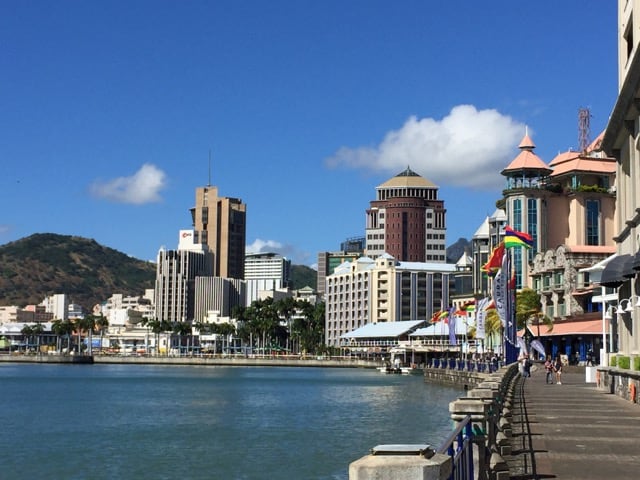 While the mainland has stunning beaches all around, the islands in the lagoon are more amazing in my opinion. Part of the attraction is getting there – by speedboat or catamaran – when you glide over the incredibly blue, crystalline water. When you approach the island, you’ll be blinded by the white beaches! You can spend the day there lazing on the beach, chatting with the locals over a grilled seafood lunch and snorkelling. There are day tours to some of the popular islands which include transfers and lunch. Check out this day tour to Ile des Deux Cocos or Ile aux Cerfs, and this private catamaran tour to Ile aux Cerfs. 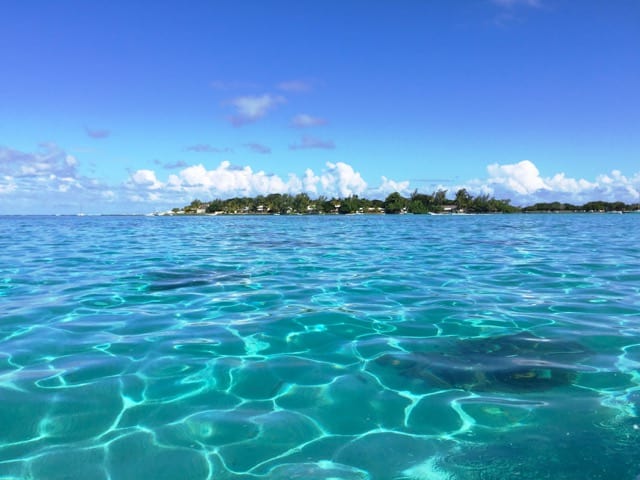 The pristine Blue Bay on the boat ride to Ile des Deux Cocos. 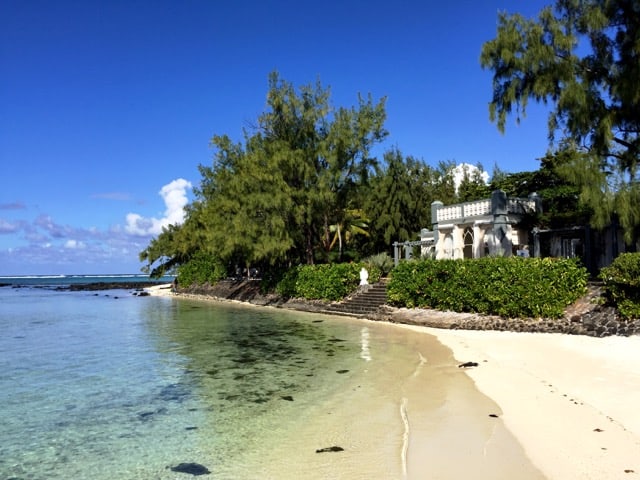 OR, you could stay at 20 Degres Sud boutique hotel. This luxurious hotel has excursions with its own catamaran to the breathtaking Ile Plat. The journey itself on a sail boat is unforgettable – if you’re lucky, you might be accompanied by whales and dolphins! – and the island, with its incredible beaches and crystal-clear water (in colours ranging from intense cobalt blue to aquamarine, turquoise and emerald green), is a sight to behold. 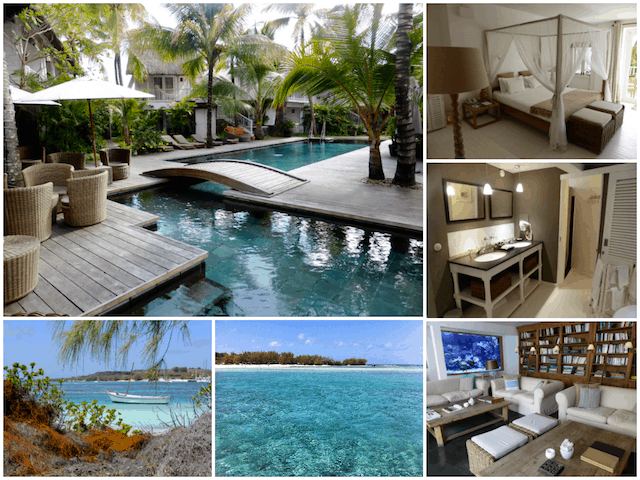 There you have it! My suggestions for relaxing and active things to do in Mauritius! I hope you enjoy my suggestions and have a terrific time in Mauritius. I’m dreaming of when I’ll return again! 🙂

See my video of Mauritius:

How to get to Mauritius

Air Mauritius has regular flights to Mauritius from Amsterdam, Paris and London as well as major cities in Asia. Air France flies from Paris, and Emirates from Dubai.

Find your accommodation in Mauritius

While you’re in this part of the world, consider hopping over to neighbouring Réunion Island, which is a completely different destination. Geared towards adventure travellers, Réunion is an island of active volcanoes, huge mountains and gushing rivers. If canyoning through old lava flows or hiking through ancient craters is more your thing, check out Reunion Island. Here are my suggestions for things to do in Reunion Island. 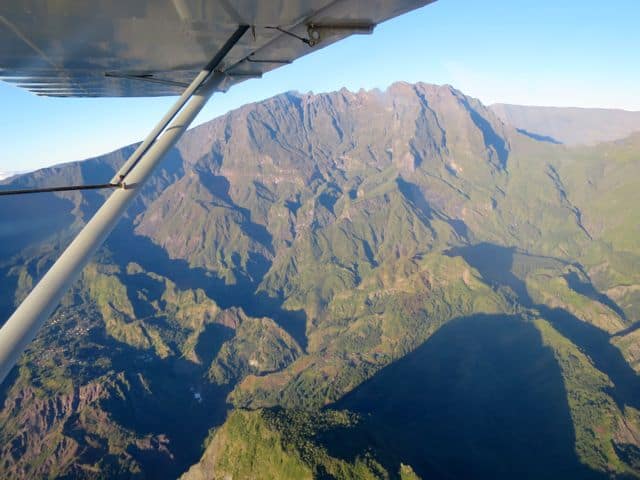 A majestic view of Piton de Neiges, at 3,069m the highest peak on Reunion Island.