Welcome to our Chicago itinerary and ultimate guide to The Jet Sisters Episode 1! You’ve probably already seen the video (thanks for watching!), but if not, definitely start here. 48 hours Chicago

For two sisters who grew up with a truckload of family from the Chicago metro area, you’d think we’d have tons of experience with the Windy City… but nah. Our main exposure to Chicago was a grandpa who obsessively watched the Cubs lose from his recliner in Florida. We once did a little performance for relatives based on Chicago, the movie musical, where Rachel was Roxie Hart as a puppet and I was the smarmy lawyer Billy Flynn. Imagine me singing, “We both reached for the gun,” while a toddler Rachel pretended to be a puppet. (Our 12-year age gap made for quite an interesting childhood!) 48 hours Chicago

We frequently say “Da Bears” without prompting… but that’s no substitute for the real Chicago experience. It eluded us for years, so we decided why not make Chicago the destination for the very first episode of The Jet Sisters? 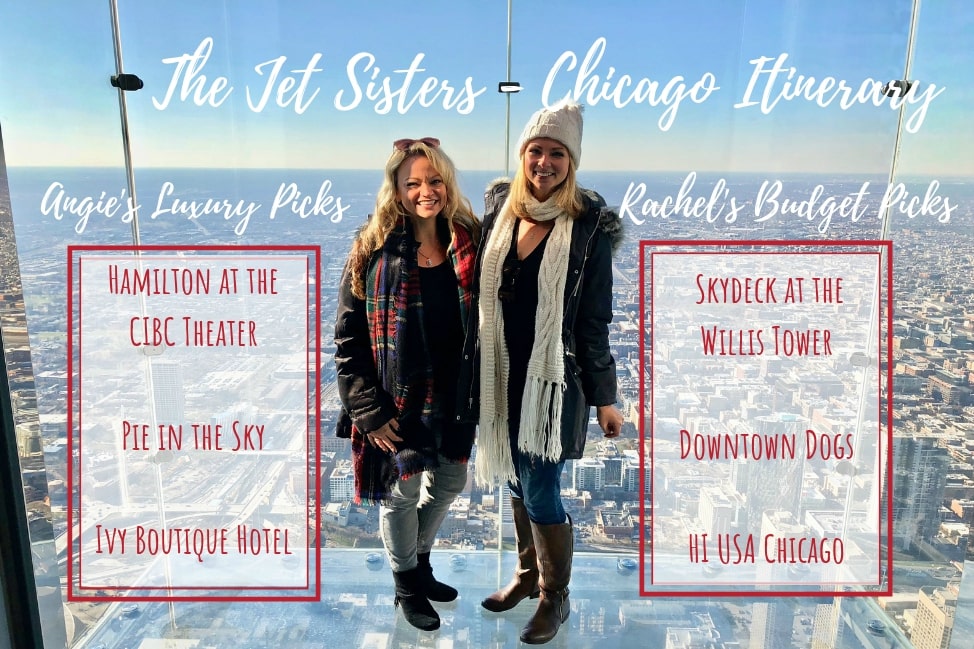 It turned out to be a brilliant choice, because we fell in love with the city immediately. With only 48 hours in Chicago, we barely scratched the surface with our Chicago itinerary, keeping mostly to the central downtown area and the top attractions, Millennium Park, the Art Institute of Chicago, the Magnificent Mile, the Navy Pier, Lake Michigan, the Willis Tower and all the little hotspots in between. The Chicago CityPASS helped us see a lot in a short amount of time. Even in November, some of the lines were quite long!

Chicago is the third most populous city in the U.S. after NYC and LA, but somehow was never on our radar until now. We’re a bit ashamed to admit it, especially because of our family roots in the area. Chicago often gets a bad rap, and we’re glad we visited and had such a friendly, warm (the people, not the weather!) experience. Would we go back? In a Chicago minute! 48 hours Chicago

We kept asking ourselves, “Why didn’t anyone tell us Chicago is incredible?” It’s the truth but it’s also significantly high praise coming from two Florida girls in twenty-degree November temps.

Pin Me For Later

Whether you’ve got a fat 401k, a pocketful of nickels, or fall somewhere in between, we’re on a mission to show you how to use whatever you’ve got to see the world your way. Because we’re sisters on either end of the Millennial spectrum, we focus our travel itineraries on what we would like to see, do and eat.

One thing we know: Millennials prefer experiences over things.

That said, these itineraries work for anyone from Baby Boomer to Generation Z – just decide how much you want to spend and pick and choose accordingly! Traveling and experiencing the world as global citizens is a priority. So if that’s you, whether you’re 16 or 106, The Jet Sisters show is right up your alley. 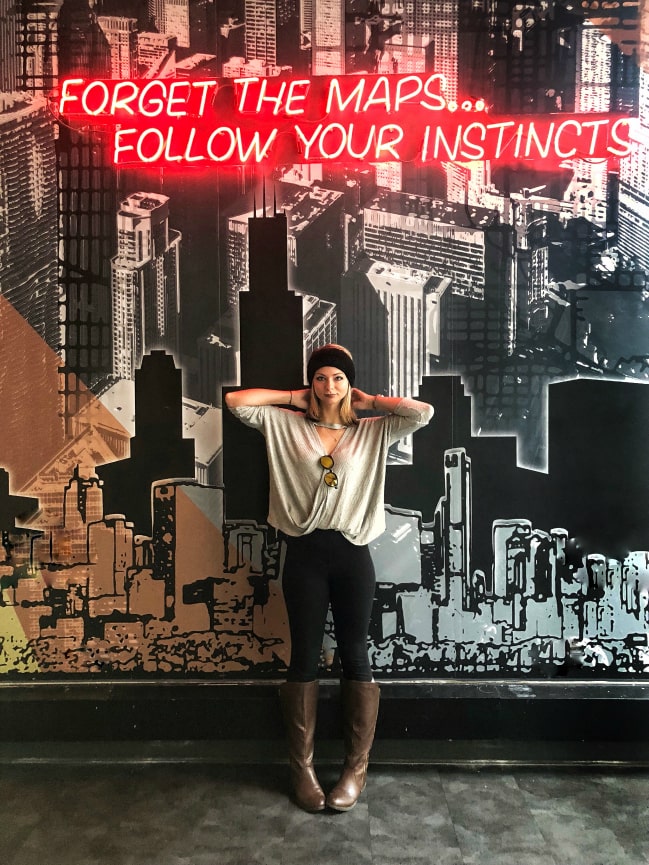 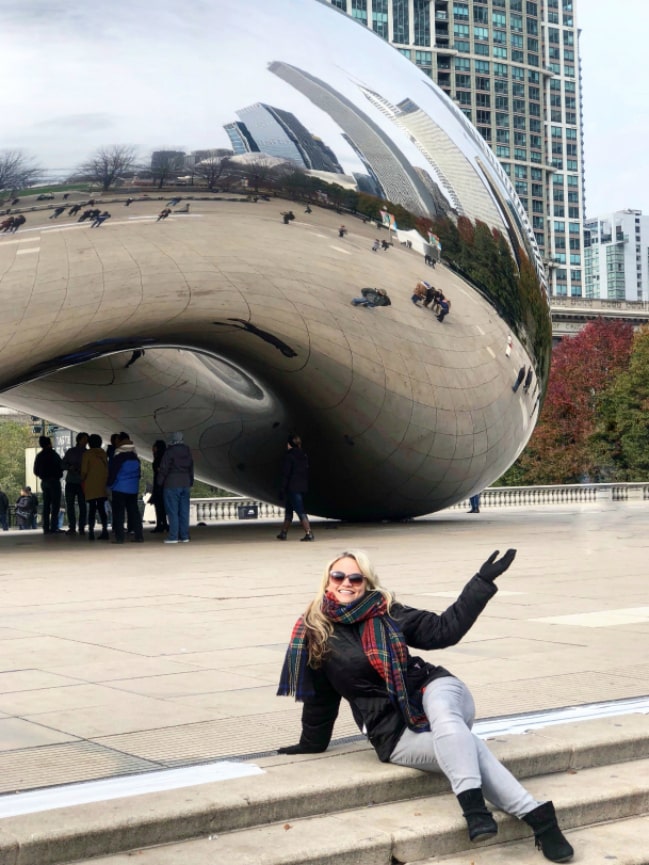 Together, we aim to capture a comprehensive itinerary that’ll help you decide where to splurge and where to save when you visit. Are you ready for 48 hours in Chicago? 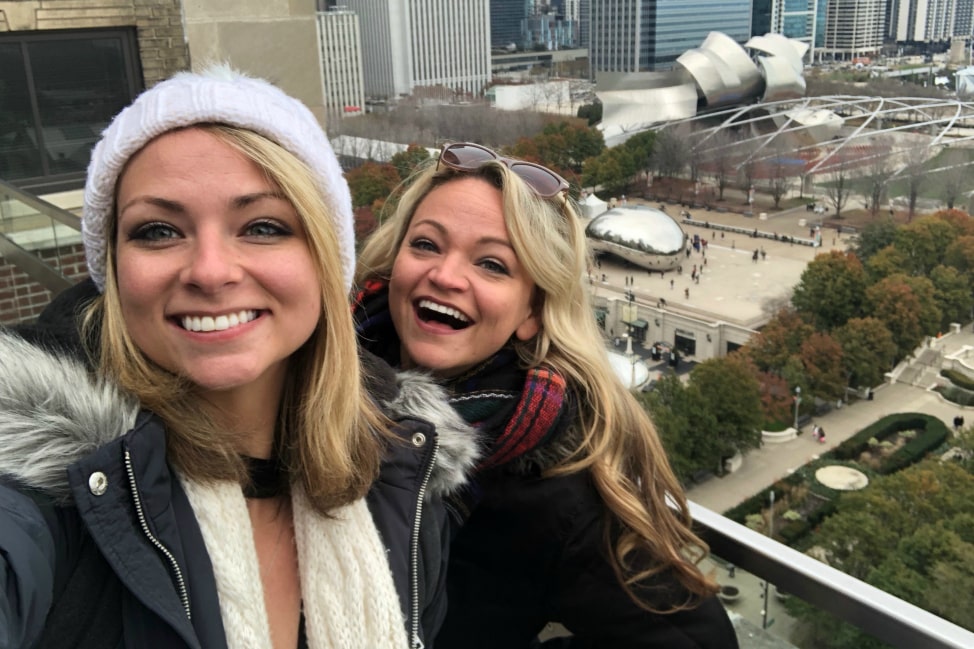 Where to Stay in Chicago

You could not pick a more centrally located, convenient, clean and cozy place to stay in Chicago than the Hostelling International on Ida B. Wells Drive. This was my first time staying in a hostel and I could not have been more impressed. First of all, despite our malfunctioning GPS, the hostel was just a quick walk from the Loop, so we were able to take public transportation from the airport practically into the lobby. 48 hours Chicago

We booked a private room with a bunkbed and a freestanding bed, a desk and our own bathroom. It felt like a hotel BUT with all the perks of hostel life, like free activities, breakfast, a common room with a ping-pong table, free WiFi and Chicago dogs on Monday nights. We didn’t have much time to meet people because we were filming almost the whole trip, but the common room and cafeteria were always full of other travelers. Now that I’ve seen hostel life, I’m totally into it for future trips. Private rooms start at just $60. In downtown Chicago, it does not get any more affordable than that!

What to Do in Chicago

Angie always says the best way to get acquainted with a new city is to go to the highest rooftop. It helps you get your bearings and understand the lay of the land in a way poring over a map just can’t. So despite a minor fear of heights, I chose the Skydeck at the Willis Tower as my budget friendly activity in Chicago.

Skydeck is one of those top attractions that makes all the lists of things to do in Chicago for good reason.

What a rush to go from the ground to the sky in a matter of seconds! Did you know the Willis Tower is the 12th tallest building in the world? In November, Skydeck wasn’t very crowded and we had cloud-free, unobstructed views of Lake Michigan and metro Chicago. From the 103rd floor, I just couldn’t believe how massive Chicago is. It goes forever! On a clear day, they say you can see four states. I think I could see Great Grandma’s house in Wisconsin. For real.

Admission to the Skydeck is included with a Chicago CityPASS, so if you’re planning to see multiple attractions, it’s a great way to save money. Book a CityPASS here, or book tickets to the Skydeck Chicago.

What to Eat in Chicago

Did you really go to Chicago if you didn’t eat a Chicago dog? NOPE.

Our first stop for tasty eats in Chi-town was the world famous Downtown Dogs, chosen for its reputation for delicious hot dogs and adorable real dogs plastered all over the place. (Would you expect anything less from me? My dog has her own Instagram!)

I’ve eaten my share of hot dogs in my culinary journey, but had never had a real Chicago dog. How crazy is that? 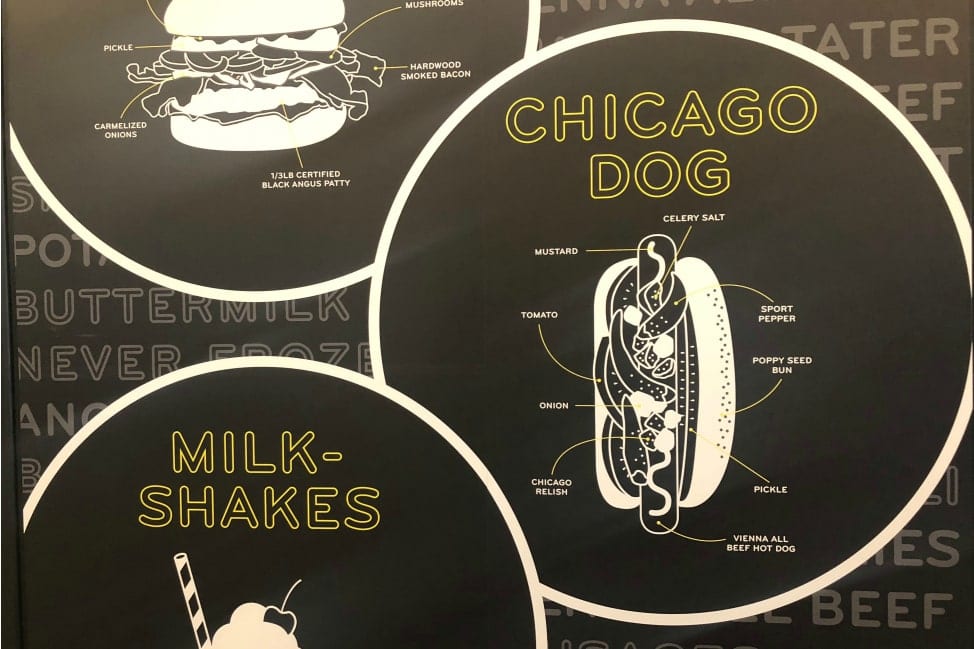 So what makes a Chicago dog a Chicago dog? Chicago dogs are all beef topped with yellow mustard, white onions, sweet pickle relish, a dill pickle spear, tomato, pickled sport peppers and a dash of celery salt. It’s often said the Chicago dog is “dragged through the garden” because of its many veggie toppings.  Different locations offer variations, but if you want to try the O.G., this is it. Just don’t put ketchup on your Chicago dog unless you want to get kicked out of town.

Even the website for Downtown Dogs says in the title: Absolutely No Ketchup. They’re intense about condiments, but I love the commitment to authenticity! Also love that they have a Hangry Hour from 7-8 p.m. with fully loaded Chicago dogs for $1.50. It doesn’t get more Chicago budget friendly than that! 48 hours Chicago 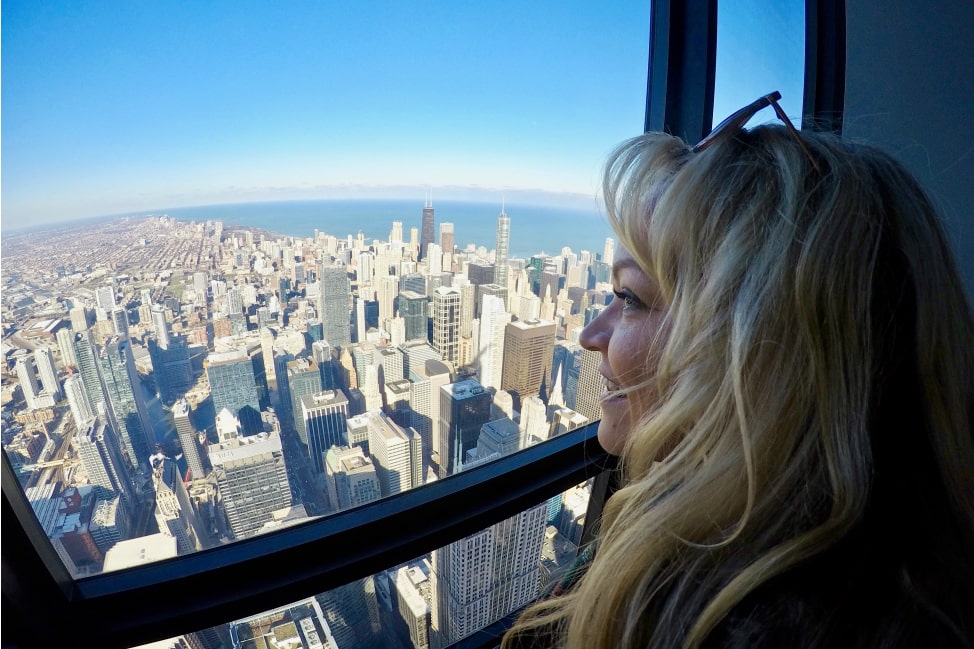 My goal in planning our upscale Chicago itinerary? Even though I tend to have a bit more to spend than Rachel, I’m always trying to find a way to stretch a dollar. For me, traveling well is about getting the best experience for your buck. So I set out to plan an unforgettable day for The Jet Sisters first episode.

Where to Stay in Chicago

Choosing a hotel was probably the toughest part because Chicago has so, so many unique options. I agonized over trendy boutiques for weeks, only settling on the Ivy Boutique because we were leaving in a matter of days and I either had to choose or sleep outside. 48 hours Chicago

The Ivy is situated between the Magnificent Mile and the Navy Pier, so it’s an ideal fit for a girls weekend that involves shopping and sightseeing. We booked a 675 sq. ft. Queen Suite with two huge, soft beds, a massive soaking tub, three TVs and spa quality bath amenities. I spent far too much time admiring the decorative touches, from splashes of pink and purple to beautiful tile in the bathroom. We could’ve stayed longer, know what I mean?

Unfortunately the rooftop bar was closed for the winter – oh yeah, things close for the winter here – so we didn’t get to check that out. But we had two fantastic drinks at the lobby bar and learned a ton about great restaurants in the area from the knowledgeable bartender. Rooms at the Ivy Boutique Hotel start at $150+ and vary greatly depending on what’s going on in the city.

What to Do in Chicago

I’d be lying if I said reasonably priced Hamilton tickets weren’t one of the main reasons we were drawn to Chicago. We’d been absolutely dying to see the show and couldn’t wait another moment for the tour to end up in Florida, so that’s how we ended up at the CIBC Theater crying our faces off and singing on a street corner on a 19-degree night. (Seriously, watch the episode if only to see us ugly cry in public.)

There’s not much I can say about Hamilton that hasn’t already been said, but I’ll tell you what. It exceeded the sky high expectations we had for it, and we already booked tickets to see it again. A must see, for real.

Tickets range from $72 to $500 and are hands down the best money I spent all year. Get your tickets to Hamilton Chicago at the CIBC Theater.

Where to Eat in Chicago

Want to check off two of the biggest Chicago bucket list items in one night? If you said yes, Pie in the Sky is the way to do it. 48 hours Chicago

What a treat this was! And not just because I ate gluten for the first time in months. You can really get a whole lot of Chicago in this experience. An almost private visit to the Skydeck, an unparalleled 360 degree of Chicagoland from the 103rd floor and, the best part, world famous Giordano’s pizza, which everyone told us was worth the plane ticket on its own. (And they were right!) 48 hours Chicago

We were there midweek and had the entire 103rd floor to ourselves. (We certainly wouldn’t have been dancing quite so funky if there were other diners!) Salad, a thick pizza with as many topping as you want and dessert are included in the $100+ price. Only in Chicago! Click here to book Pie in the Sky. 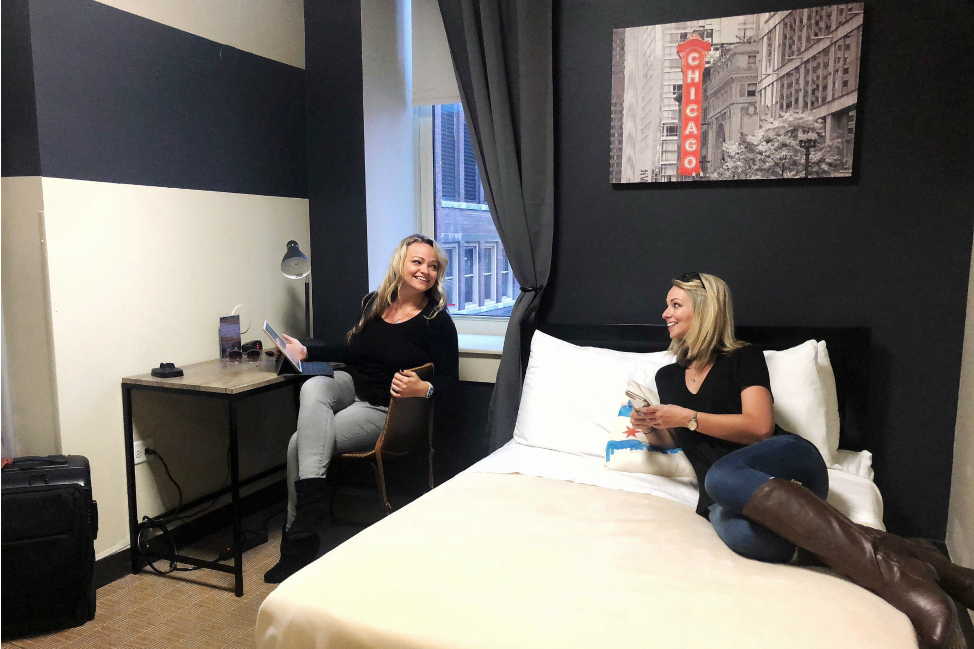 We managed to squeeze in a few fun experiences that didn’t make it into the video, like a midday drink at Cindy’s rooftop, a frolic through the Art Institute of Chicago and a wander down the Magnificent Mile. With only 48 hours in Chicago, I imagine we missed quite a bit! What should we add to our Chicago itinerary for our next visit?

What’s better than a well put together video? BLOOPERS! Check out the outtakes and you’ll soon see who the professional is on this team (hint: it’s not me).