It’s NO exaggeration when I say that every Japanese and (almost) every keen traveler in the world keeps a close watch on the cherry blossom (sakura) forecast of Japan at the start of every year! After all, who wouldn’t want to catch the short-lived yet magical spring season wherein every space in the country is enveloped in shades of soft pink and white?

Now, I say ‘short-lived’ because cherry blossoms stay on their branches for only about 10 days (it can last for 2 weeks if the weather is perfect or less than 10 if the weather is ghastly). As if that doesn’t make it elusive enough, it’s not always a guarantee that you can get to enjoy them at their peak — but then again, don’t fret: there typically are close-to-accurate forecasts available that predict the cherry blossoms’ first opening and full bloom.

…And as such, this is where this post comes in!

I’ve already had several trips to Japan where I got to enjoy the beauty of this season and now, it is my hope that you get to enjoy it too! So with the help of the forecast map below, you could start planning a successful Japan cherry blossom adventure as early as now: DISCLAIMER: The above data is as of February 22, 2019 and it is based from the forecast done by the Japan Meteorological Corporation. Take note that sudden changes in temperature, rainfall and wind strength can accelerate, delay or shorten the forecast above — but you can already use this initial forecast as a preliminary guide. Rest assured, I will keep this post updated once dates happen to change so come drop by from time to time.

Cherry blossom trees in Japan bloom in an upward direction starting from the island of Okinawa (sometime in the middle of January) and then ending at Hokkaido (around the end of April or beginning of May). If you think about it… provided that you’ve got the time and the money, you can totally indulge in a 3-month long travel spree to enjoy the whole pink season!

But of course — not everyone can do such a thing, so if you only have a limited vacation time for Japan, below is a list of some of the best and most popular spots for viewing the cherry blossom season.
.

To better streamline this section, I will be listing the best cherry blossom spots by region. (FYI: Japan has 8 big regions and each of them are sectioned into prefectures that all total to 47).

TRIVIA: Hanami or “flower viewing” is an ancient tradition in Japan wherein locals take the time to enjoy the cherry blossoms or sakura trees. Nowdays, the Japanese typically celebrate it by having an outdoor party or picnic under the trees during daytime or nightime (called as yozakura or “night sakura“).

TIP: Discover the beauty of Mt. Fuji up close as well as its nearby natural attractions by going on a day tour from Tokyo! Or if you come sometime around April 14 to May 27, you can take part in the limited-time Shibazakura Festival near Mt. Fuji where you can witness a field of unique pink moss!

TIP: From Osaka, you can also do a day tour with KKday to Kyoto’s Arashiyama and Nara’s deer park to enjoy the sakura season!

TIP: You can easily go to these 2 places by going on a day tour from Tokyo! Or if you come sometime around April 14 to May 27, you can take part in the limited-time Shibazakura Festival near Mt. Fuji where you can witness a field of unique pink moss.

TIP: From Nagoya, you can go on a day trip to the famous World Heritage Site of Shirakawa-go to enjoy its picturesque traditional houses that are amidst pink cherry trees.

◘◘ Other prefectures in Tohoku
(Late April to Early May)

Where to best stay (for accommodations)?
To search for the best accommodations at the best prices in any place in Japan, I suggest checking out Agoda and Booking.com. If you’re rather interested in renting affordable yet comfortable houses or apartments, check AirBnB.

How can I go around Japan?
If you won’t be renting a car, it’s highly likely that the most of your journey (hopping from one prefecture to the next) will be done with either local trains or shinkansen trains. That being said, it helps to avail rail passes beforehand. For such, you can purchase the Japan Rail Pass (JR Pass) which gives you unlimited travel on JR trains nationwide. Make sure that you grab this deal since it’s a perk that’s only exclusive to Japan tourists! (If you want to know if it’s worth it or not to get a JR Pass, read here.)

If you ever have a hard time navigating yourself through the country’s dense transportation systems, I would recommend using Google Maps for mapping out your day-to-day route because it will show in detail the fastest connections you can do (by walking, by car, by bus, and by train). I use it a lot in my travels and it’s very accurate! You can download areas on the map so you can use it offline, but it’s best to have your own pocket WiFi or SIM Card to stay connected online.

Should I get a visa to visit Japan?
If you’re NOT a citizen of any of Japan’s exempted countries, you are then required to avail a visa beforehand.

If you’re from the Philippines, you can read my guide on how to get a Japan visa in Manila here. 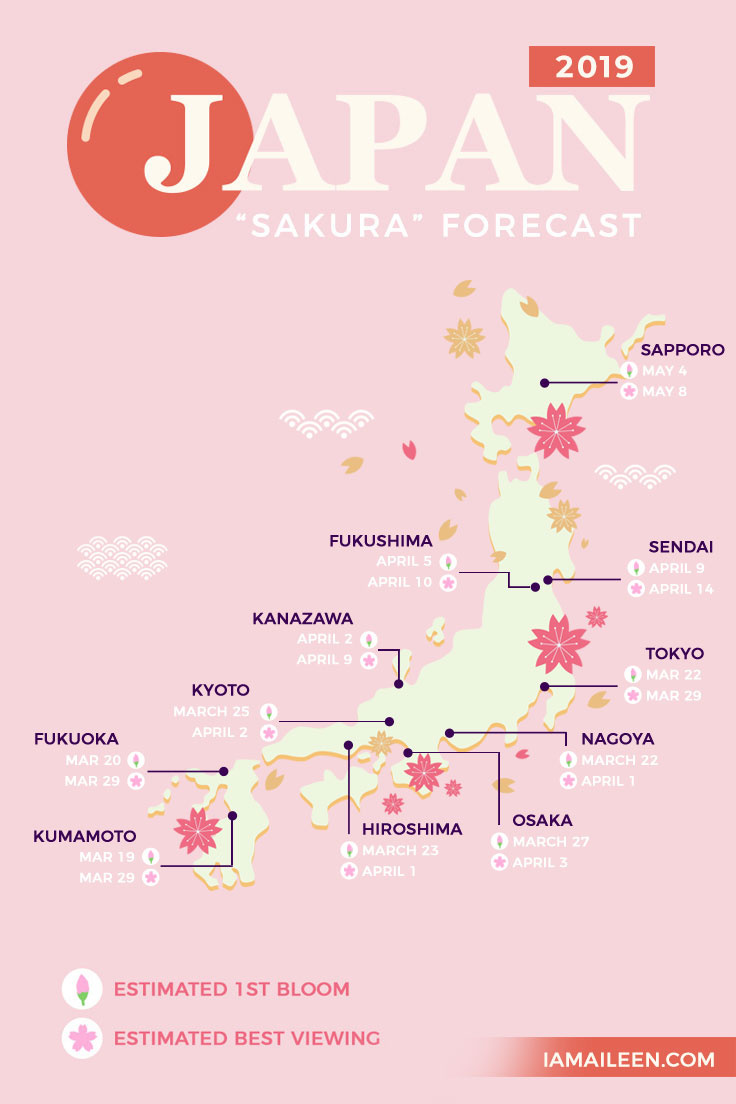 No matter if it will be your first time to the ‘Land of the Rising Sun’ or not, I hope this post has given you enough info and tips to start planning your amazing “sakura” season in Japan!

Let me know how it goes for you. Enjoy!