Disneyland Resort deserves a ton of credit. Disney has nowhere near the amount of space to work within Anaheim that Walt Disney World has in Orlando, but they managed to create a two-park, three hotel destination that includes its own Downtown Disney. Over time, the resort development has beautified to an astonishing degree partly due to the ever-evolving Disneyland Resort hotels.

It wasn’t long ago that Disneyland visitors didn’t have many options for vacationing in a completely Disney environment. With three Disneyland Resort hotels, it is entirely possible to enjoy a multiple day vacation on Disney grounds without leaving for anything.

Did you know that Disneyland Hotel, was not always owned by Disney?

Next, they bought the nearby Pan Pacific, which became the Disney Pacific. Finally, in connection with Disneyland’s second gate, Disney’s California Adventure, they began an expansion that included building a brand new hotel and an outdoor mall.

If budget permits, we recommend choosing Disneyland Resort hotels for your Disneyland vacation due to the myriad additional benefits they offer. In addition to being the closest hotels to Disneyland, the top perks include the below.

Registered Disneyland Resort hotel guests can enter Disneyland Park or Disney’s California Adventure Park one hour before the parks open to the public on all days of a stay. It’s important to check the calendar to see which park is offering Extra Magic Hour during your stay as currently, the schedule is like this:

Key to the Magic Card

The concierges can arrange wake-up calls by favorite Disney characters and special in-room celebrations. Plus, they’re concierges at Disneyland Resort hotels so ask away for their tips to help plan your itinerary.

Disney’s Grand Californian Hotel and Spa is the only Disneyland Resort hotel that Disney designed and built from the ground up. Inspired by the Arts and Crafts period, the Grand Californian’s sprawling bungalows stretch across Downtown Disney and overlook Grizzly Peak.

This is the first hotel in the United States to have its own park entrance. You can access Disney’s California Adventure park by walking past the pool area, which offers three pools, a children’s pool and a water slide). Imagineers designed the Grand Californian to fit in thematically with the Grizzly Peak area of the theme park. The balcony views during the sunrise make you feel like you are thousands of feet up in a national park similar to Yosemite or Sequoia.

Disney’s Grand Californian Hotel and Spa has all the bells and whistles of a AAA Four Diamond resort. It’s the luxury hotel option of the three Disneyland Resort hotels. Mandara Spa services offer a luxurious and therapeutic experience that infuses nature and science. This harmonic east meets west philosophy and approach brings peace and beauty through a variety of journey’s inspired by Asia, India, the Mediterranean, and the New World.

Disney’s Grand Californian boasts an impressive lobby with high rafters, stunning architecture and a gigantic fireplace to cozy up to. There is a beautiful garden for weddings, a warm and inviting bar, and an impressive buffet at the Storyteller Cafe.

Breakfast and brunch at Storyteller Cafe include characters for families with kids. For adults, Napa Rose offers an array of California wines and inspired California dishes.

The 948 rooms have recently been redesigned to include the latest technological features and premium amenities. Other recent renovations include a concierge-level lounge for guests who enjoy a quieter, more exclusive place to relax and a refreshed lobby.

The hotel struggled to find a theme, taking Disney Cruise line ships as the namesake for the three towers. However, a recent redesign tied the hotel organically to the park it was built for. Now the Fantasyland Tower, the Frontierland Tower, and the Adventureland Tower offer just the right balance of creativity and sophistication to win over any traveler.

Fantasyland Tower theming extends well into the main lobby. Alice in Wonderland and “it’s a small world” artwork and décor extends even to the furniture. The smaller lobbies of the other towers offer machetes, models, and concept art for a cerebral approach to theming that has a certain amount of reverence for the subject matter. A scale model of Bug Thunder Mountain Railroad awaits in the lower of the Frontier Tower while Jungle Cruise characters are featured in the Adventure Tower.

The 973 rooms are contemporary and sleek in fashion with gorgeous tree-lined views of the swimming pool and garden areas. A unique collection of individual suites in the hotel are themed to Big Thunder Mountain, Adventureland, Pirates of the Caribbean, and Fantasyland with astounding details. Disneyland Hotel also features upgraded concierge-level rooms with access to the exclusive concierge lounge.

The pool has two swirling water slides themed to the monorail in a classic homage that showcases a sign featuring the original Disneyland marque and two zipping monorail lines. Trader Sam’s entertains guests Jungle Cruise style at an interactive bar, and Tangaroa Cafe is just one counter service venue where you can buy a Dole Whip.

In the lobby adjacent to the Fantasyland Tower is Goofy’s Kitchen, the premier Disneyland Resort hotel character dining experience. They serve breakfast and dinner at Goofy’s Kitchen and the characters are always there, unlike the other character dining that only takes place at breakfast. For a more refined meal, Steakhouse 55 is one of the best places on property, especially if you like steak. The lounge outside is also very inviting and comfortable. 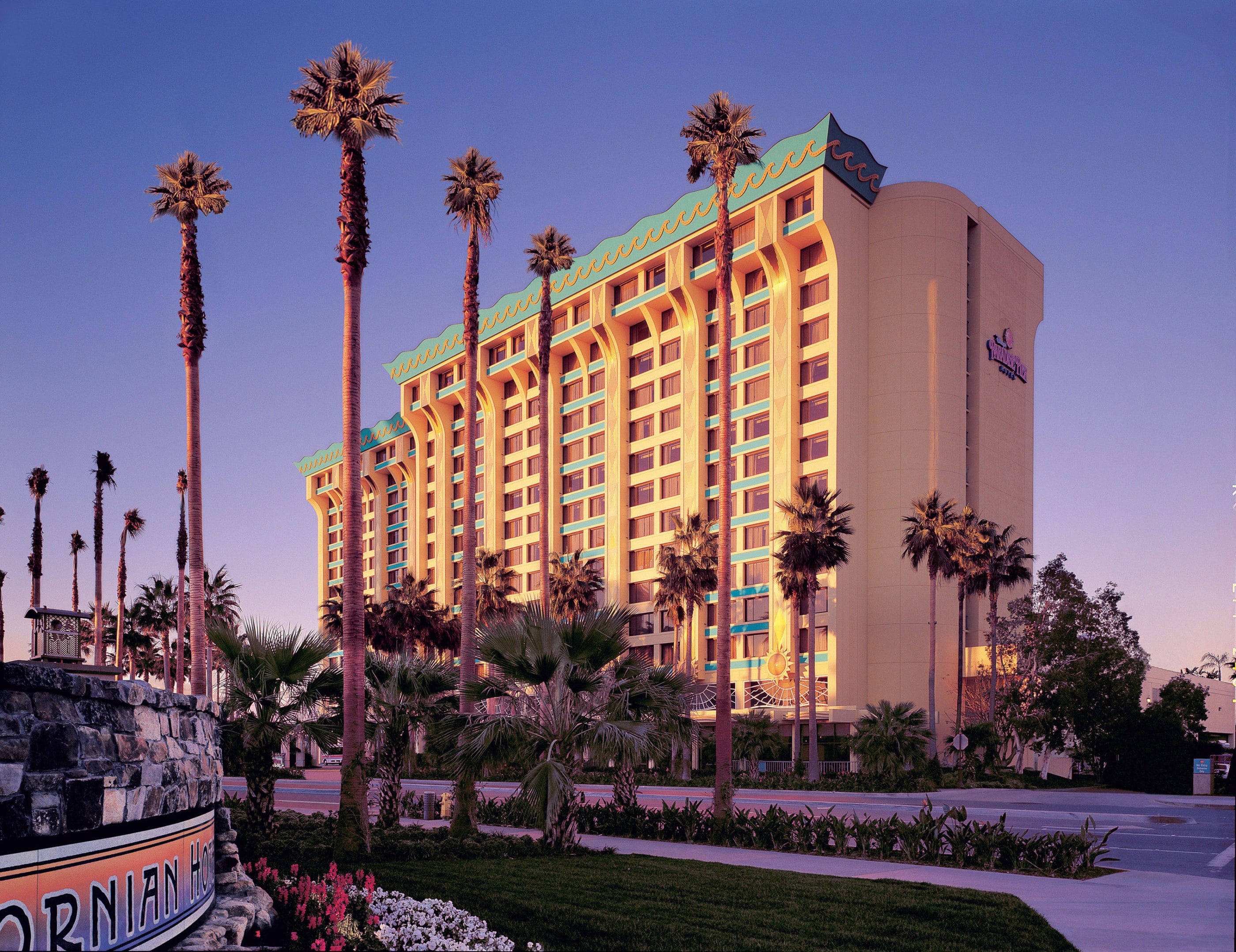 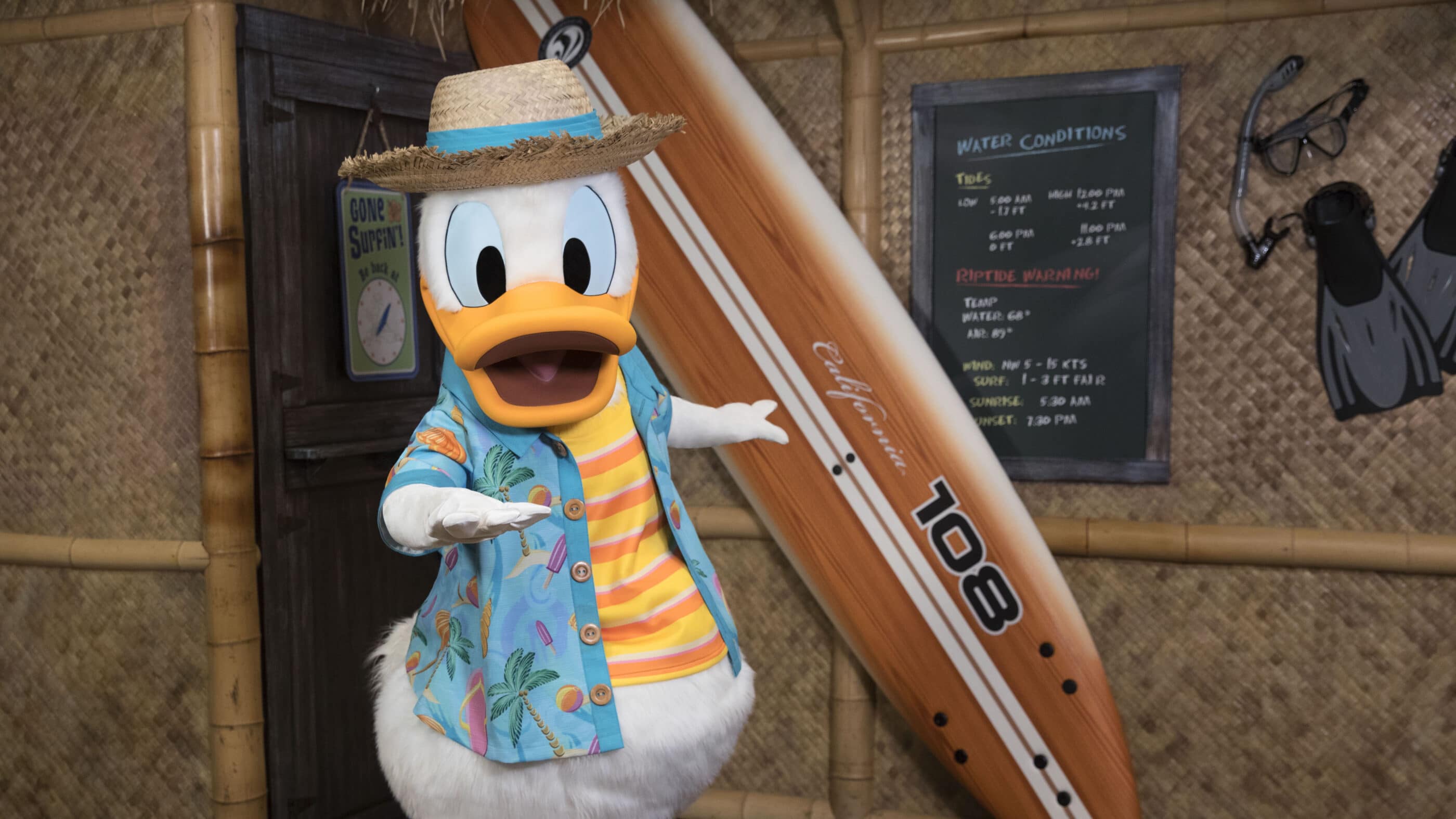 Disney renamed the Disney Pacific Paradise Pier to complement the section in Disney’s California Adventure of the same name. It even had its own gate into the park, right through Paradise Gardens.

For as inexpensive as it is by comparison to the other two Disneyland Resort hotels, it is still a pretty nice hotel. Donald Duck and friends greet diners for breakfast at PCH Grill, named after California’s famous Pacific Coast Highway (PCH). The rooftop pool is an attraction all its own with the 186-foot-hight California Streamin’ waterslide that twists and turns into a miniature pool on the rooftop deck.

One amazing feature afforded to guests at Disney’s Paradise Pier is that the music from the fireworks can be piped in to the pool deck for a magical viewing experience! You’ll see fireworks from Disneyland Park from here, too. Some of the 481 rooms enjoy views of Pixar Pier.

Which Disneyland Resort hotel is your favorite? 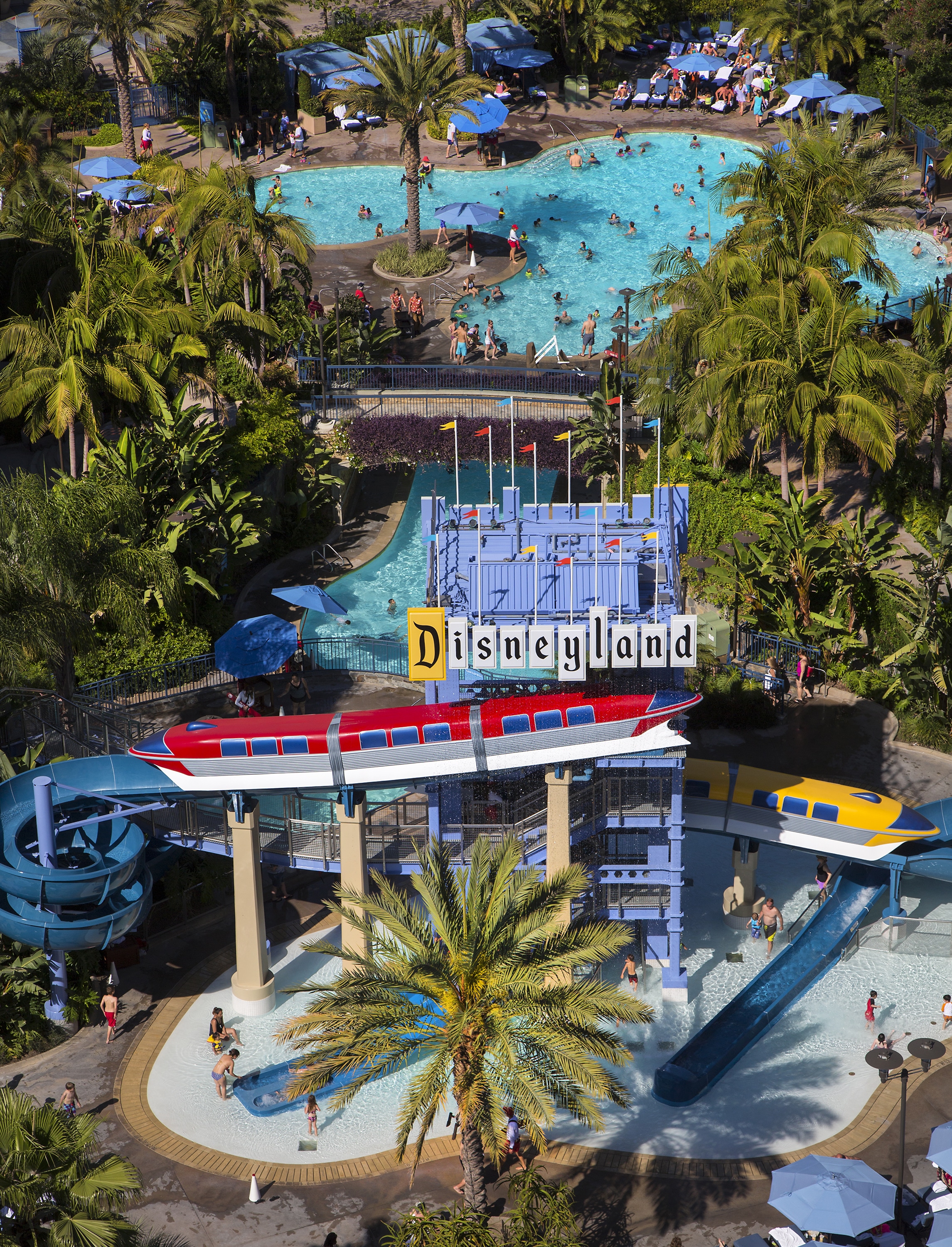